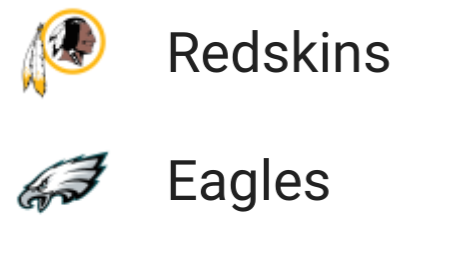 The Philadelphia Eagles are favored by 8 over the Washington Redskins in this week 1 NFC East matchup. The Redskins are undecided as of this mid July writing, who will be under center, but that hasn’t stopped bettors from taking the points with the Redskins. The current total is 46.5.

The Eagles made the playoffs last season, losing to the New Orleans Saints 20-16 in the Division Playoffs, with 2018 Super Bowl MVP Nick Foles saving the team again in the end of the season. Philly was only 9-9 ATS last season but did cover in their last three games including both playoff games, which were on the road.

The Eagles were 5-3 at home last season and beat the Redskins there 28-13 in early December.

The Redskins were 7-9 last season missing the playoffs but were 4-4 on the road despite the loss in Philly. While the Skins were 9-7 ATS last season they did not cover in the two games against the Eagles.

Who will Be Under Center for the Skins?

The big question for Washington for this game, and the season, is who will their QB be? Alex Smith is still out and while the team traded for Case Keenum, Dwayne Haskins of Ohio State fell to them with the 15th pick of the draft.

Washington has the looming QB issue and the WR corps is a question mark as well, but the RB position is stacked. They have Adrian Peterson, Samaje Perine, rookie Bryce Love, and Derrius Guice, who missed his rookie season with an injury.

The Skins’ defense ranked in the middle of the pack against the pass and the run and they gave up 52 points to the Eagles in the two losses facing them last season.

However, in both losses Washington stated Mark Sanchez and Josh Johnson at QB and they were both recent signings after Smith and Colt McCoy went down with injuries.

For the last two seasons, including their Super Bowl run in 2018, the Eagles were saved by Nick Foles after Carson Wentz went down with injuries. However, the backup is not the starter in Jacksonville, so Wentz has a lot of pressure to stay upright this season.

Philadelphia was busy in the off-season picking up RB Jordan Howard, WR DeSean Jackson and the trio of Malik Jackson, Zach Brown, and Vinny Curry to bolster a defense that ranked 23rd in the league last season.

This game sets up well for the Eagles on defense, as they will get a heavy dose of the run. The Eagles were legit last season stopping the run but ranked 3rd to last in the league in defending the pass.

They did address needs in the secondary, but their pass D is still a concern. Can whoever plays QB for the Skins take advantage of that?

The Redskins are thin at the WR position and that will show in this game. They will try to run the ball but will not have much success.

Wentz knows the pressure is on. He has the weapons on the outside and Howard may have a big season in the City of Brotherly Love.

The Eagles have won four in a row against the Skins where they covered the spread in every game. On top of that Philly won every game by double digits.

The logical choice in this spot would be the Eagles. Simply too many question marks with the Redskins going into this season.

Laying anything over a TD in the NFL can get dicey though. With the question marks surrounding the Redskins offense and the likely heavy dose of the running game, there may be more value with the total here.