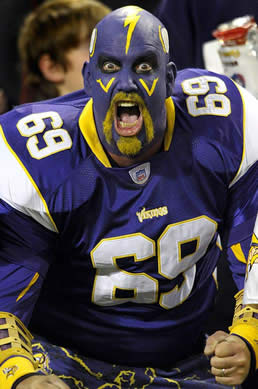 The Vikings won a playoff game last season and the team has a great run game but the loss of Stefon Diggs leaves a big hole in the passing attack.

Still, the team has Kirk Cousins at the helm and a good defense and the Vikes have the best betting odds to win the NFC North.

The Vikings picked up a couple of veterans in the off-season in DT Michael Pierce and Tajae Sharpe.

Diggs led the team in receiving yards last season (1,130 yards) but was not happy in the Land of 10,000 Lakes and was shipped to the Buffalo Bills.

Last season Kirk Cousins finally won a big playoff game but lost a big weapon in Diggs. WR Justin Jefferson has a big upside and was great at LSU last season and the team still has Adam Thielen (418 receiving yards), who was injured for several games last season, and Kyle Rudolph (367 receiving yards).

Cousins did not put up huge numbers last season (3.603 yards 26 TD) but he managed games well, only had six INT, and completed nearly 70% of his passes.

The Vikings strength last season on offense was a run game that ranked sixth in the league in rushing yards per game.

RB Dalvin Cook was a stud last season making the Pro Bowl and rushing for 1,135 yards, averaging 4.5 yards per carry and also was second on the team in receiving yards (53 rec 519 receiving yards).

Gary Kubiak takes over at offensive coordinator and while he has guided passing attacks in the past the Vikes will still likely be a run-first team yet again with Cook in the backfield.

The Vikings lost their top three cornerbacks and lost three players on the defensive line but the LB corps is still one of the best in the game and the safety position is set.

However, the pass defense was the weakness of the D and Mike Hughes, who ended the last two seasons on IR, and rookie Jeff Gladney will lead the unit, so there are question marks.

The Vikings have a tough schedule early on hosting the Packers in the season opener.

Then they play three straight games against tough teams in the AFC South in the Colts, Titans, and Texans and then the Seahawks with three of those five games on the road.

Prediction:  While the Vikings have a killer early schedule and issues at the WR position the team will make the playoffs again.

However, they will not unseat the Packers as the division champion and will settle for a Wild Card. Minnesota is a good bet to make the playoffs but not to get to the Super Bowl or even the NFC title game.