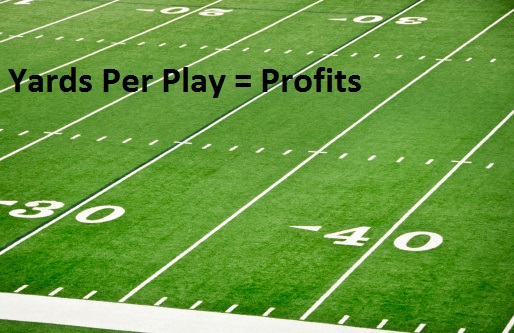 Both methods enable an NFL handicapper to get a quick snapshot of any particular team or the league as a whole.

Teams that gain more yards than they allow are more likely to win. Or simply, teams that gain a bunch of yards and give up very few, are probably very good.

Likewise, the opposite would also be true. Teams that give up tons of yards and have trouble gaining yards on offense, usually aren’t very good. Common sense, right?

First, you’ll need to gather the NFL yards per play stats. There are a variety of sites that present this data. Pro Football Reference is one.

If the “A” column is the team, and “B and C” are offensive and defensive yardages respectively, use the formula “=b1-c1” in column D.

This will give a “yardage differential” for each team, which if positive, indicates a team that gains more yardage on offense than it surrenders.

You could even use a notebook with a pencil if you’re really old school, though I can’t imagine there are too many of those guys left.

Use Yardage Differential To Make a Line

There’s a “quick and dirty” rule for setting a spread using NFL yardage differential. Each 0.15 yards per play is worth 1 point. As an example, let’s examine a game between Green Bay at Philadelphia.

As with all tools for evaluating teams, this calculation is best used in conjunction with other handicapping methods and using common sense. Many statistical methods become far more viable after 4-6 games. However, even early in the season, these types of statistical methods can be a good way to look for new winning angles like identifying under-priced big favorites.

Now this article focuses on using yards per play to handicap the NFL. However, you can also use the stats for college football.

With the NFL, there is very little difference in teams schedule strength. In college football, the gaps are huge. A team from a weak conference with a weak schedule strength may have decent numbers.

In order to use yards per play for college football, some adjustments need to be made to account for schedule strength. We’ll save that for another day. But the stat is still worth looking at for the college game as just like with the NFL, it give you a quick snapshot of a teams overall performance.