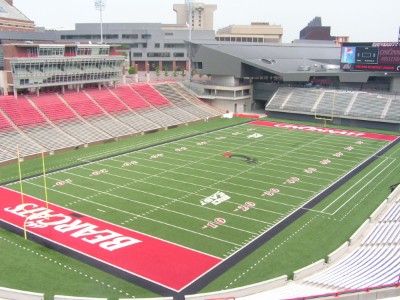 The jury remains out on how good UCF is. While the win over Stanford was impressive at the time, the significance has been lowered in recent weeks, especially after the loss against Pittsburgh.

It’s kind of the same situation for Cincinnati because while it got throttled by Ohio State, it has some big wins and a 3-1 ATS mark. The Knights are still the favorite to win the AAC and opened as a -4.5 point road favorite for this game.

These teams have never played a competitive game in terms of the score (four meetings) even though both have been near the top of the conference standings in recent years.

That said, last year’s matchup was closer than the actual 38-13 score line, mainly because the yardage totals were fairly even. The difference maker for UCF was that Cincinnati lost three fumbles and they had a lot of short fields to work with. Remove those fumbles and that game could’ve been closer.

The big thing for the Bearcats in that loss was that they ran for 252 yards on 4.6 yards per carry. If they can get the ground game going again, they’ll be in business for an outright upset at home under the lights.

Running back Michael Warren is the key to that and outside of the OSU loss, he’s been solid, running for 262 yards and four touchdowns, while backup Tavion Thomas is at a higher 5.1 yards per carry.

Quarterback Desmond Ridder couldn’t do anything in last year’s game and it’d be nice if he could show some competence this time. His goal will be to not turn it over after throwing interceptions in each of the first three games to start the season.

The UCF defense is still a mystery because while it did well against FAU and Stanford, the 35 points allowed to Pitt is hard to ignore. The question is if Cincy’s defense can play as well as it did last year, limiting UCF to just 3.7 yards per carry. If the Knights can’t hit over four yards per rush, anything could happen.

The duo of Greg McCrae and Adrian Killins has been dominant, rushing for a combined 633 yards and eight touchdowns, while quarterback Dillon Gabriel has been just as impressive.

While the starting QB wasn’t known ahead of the season, Gabriel has taken over, averaging 11.1 yards per attempt to go with 14 touchdowns and two picks. Top wideout Gabriel Davis is running past secondaries, already with 499 yards and eight touchdowns on 20 yards per reception.

The one time Cincy played a dynamic offense like this, it was destroyed by Ohio State. While UCF isn’t Ohio State, it’s hard to ignore the 89 points UCF has scored in the last two meetings between these schools.

There are some worries about UCF after the loss to Pitt and that’s enhanced by Cincy’s recent success. UCF is 5-1 ATS in its last six following an ATS loss, while Cincy has failed to cover in its last four at home against a team with a winning record. The favorite has covered in all four meetings between these teams.