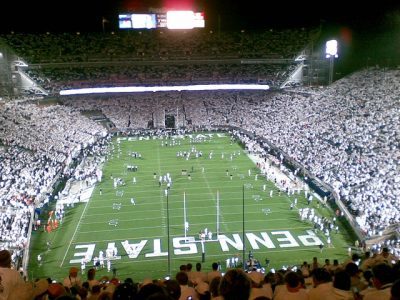 The potential for this game to be ugly is high. Both Penn State and Michigan are built around defense and that’s how they both took down Iowa. The Nittany Lions are getting more love at home and opened as a -9 point favorite with an over/under of 45.

Anything over seven points seems a little too high for this spread. There’s a reason Penn State has scored 34 points against the two toughest defenses it has faced. Sure, other than that the Nittany Lions have some big numbers, but that’s due to schedule.

It’s a similar case for Michigan, which has 24 points against the best two defenses it has faced. This spread was likely influenced by the last time UM played on the road against a legit team as it was blown out by Wisconsin 35-14.

Penn State may be as good as Wisconsin, but its best win was by five points against Iowa, a team that Michigan already beat.

If Penn State wants to keep its Big Ten hopes alive, it has to win this one with upcoming trips to Michigan State, Minnesota and Ohio State remaining.

The biggest question is first-year starting quarterback Sean Clifford, who has huge numbers (13 TDs, 2 INTs), but has a combined one touchdown on less than 50% completion against Pitt and Iowa.

Michigan may have the lone loss in this matchup, but it’s still allowing less than 300 yards per game and Clifford could have another tough outing.

That’s why Clifford will likely be asked to run the ball a little more with the help of running back Noah Cain, who is averaging 5.4 yards per carry. If that doesn’t work, the winner will likely be the first to 17 points.

That’s because Michigan’s offense has been similarly erratic. Shea Patterson doesn’t have as good of numbers as Clifford and has completed 50% or fewer of his passes in three of the last four games.

Maybe his ugliest stat is that he went 11-for-22 against Illinois last week. Similar to PSU, Michigan is going to lean on the run game as much as possible.

Running back Zach Charbonnet should be the top option with 376 yards, but he was forced to leave early last game and if he’s not ready, Hassan Haskins took up a bigger role against Illinois.

The problem is that the Nittany Lions have been awesome, allowing 8.2 points and 53.8 rushing yards per game.

You could point to the schedule for those numbers, but it’s not like Michigan has that much better of an offense than Iowa or Pitt.

It’s also almost useless to look at last year’s result in which Michigan won 42-7 because that’s not going to happen again unless it’s the exact opposite.

The favorite has covered the last five meetings between these schools and the over is 5-0 in the Statelast five played at Penn State. The home team has won six of the last seven meetings and the last three have all been decided by at least 29 points.