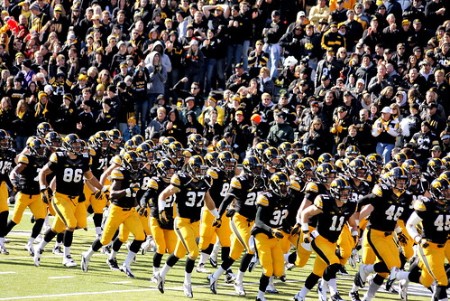 Winning on the road isn’t easy and Penn State found that out last weekend. That’s also why Minnesota isn’t favored this week against a three-loss Iowa team. The Hawkeyes were -3 point home favorites with an over/under of 44 early in the week.

Despite a sketchy early start to the season, Minnesota remains undefeated after taking down Penn State last weekend. Of course, its lone road wins have come against Fresno State, Purdue and Rutgers so this will be a bit of a different test.

Iowa has three losses, yet two were on the road at Michigan and Wisconsin, and the other was by five points at home against Penn State. This game will be close unless Minnesota’s offense goes off.

That’s a possibility, but the Hawkeyes are allowing 288.9 yards and 11.7 points per game. In their loss at Wisconsin last week, the 24 points allowed was their most given up this season.

While Minnesota has carved up Big Ten competition, it hasn’t been in this situation yet. Sure, it beat up on Penn State last weekend, but that also came at home. The Golden Gophers will find more resistance on the road against an equally good defense.

They use a balanced attack, which has worked against everyone with quarterback Tanner Morgan slinging 10.9 yards per attempt for 21 touchdowns and four interceptions.

Those numbers are impressive and he wasn’t slowed down against the Nittany Lions, completing 18-of-20 passes. The other part is the rushing attack with the trio of Rodney Smith, Mohamed Ibrahim and Shannon Brooks all averaging at least 4.7 yards per carry.

The major advantage Minnesota has in this game is the other side of the ball where Iowa has struggled to move the chains all season. While it’s not allowing points, it also hasn’t scored more than 30 points in Big Ten play and is the reason it lost 17-12 to Penn State.

It’s still a question of how good the Minnesota defense is because most of its positive numbers came in beatdowns against bad Big Ten teams. It’s a good group, allowing 20.7 points per game, but the main reason it beat Penn State was because of its three interceptions.

For the Hawkeyes to win, they can’t turn the ball over, simple as that. Nate Stanley was solid against Wisconsin last week and at least knows how to run the offense despite poor numbers, averaging 7.4 yards per attempt for 12 touchdowns and five interceptions.

Similar to Minnesota, Iowa uses three running backs in Mekhi Sargent, Toren Young and Tyler Goodson. That trio isn’t as good as Minnesota’s, but churning out yards should be possible. The Gophers are allowing 124 rushing yards per contest and can be beat by the right team.

Minnesota got the big win last week, but winning on the road is another story. Still, they’re getting three points, which seems like a lot for this Iowa team who can’t score more than 20 points against good defenses.