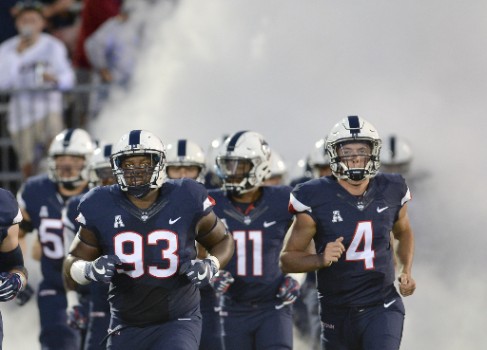 UConn is coming off a rare win, though that was mostly due to opponent (UMass). Navy is at a different level and has hopes of reaching the AAC title game, sitting at 6-1 overall. The Midshipmen opened as -26.5 point road favorites for this matchup.

The question for Navy backers is how much it will put into this game with upcoming contests against Notre Dame and SMU. Sure, Navy maybe doesn’t need much to beat UConn, but covering is another story.

Then again, this is UConn. It juiced its offensive stats with 56 points against UMass last week and while it almost beat Houston the prior game, a lot of that had to do with Houston giving its third-string quarterback his first start.

Most of the numbers point to a methodical, clock-churning win for the Mids. The Huskies have some of the worst defensive numbers in the country, allowing 196.4 rushing yards and 37.8 points per game.

That’s not going to work against the triple option, especially since these teams haven’t played since 2016. Malcolm Perry has revived the Navy offense, averaging 6.4 yards per carry en route to 14 touchdowns.

He’s also been fine throwing the ball, averaging 11.9 yards per attempt, though it’s not something this team wants to rely on. The other main ball carrier is Nelson Smith, who is averaging 4.2 yards per carry, but he’s been a nice complement to Perry.

When Navy’s triple option has success, it usually means a long day for the opposing defense. Given UConn’s defensive numbers, the Midshipmen could put up 50 points if everything works to plan.

The other issue for Connecticut is that Navy is allowing less than 20 points per game. It’s giving up points to better offenses, but has held the likes of ECU and USF to low totals.

That’ll likely be an issue for the Huskies who haven’t been the easiest team to project, scoring 21 points against UCF, but seven against Tulane.

It remains to be seen what freshman quarterback Jack Zergiotis can do against a decent defense because most of his success has come against bad defenses. He’s completing 60.7% of his passes on 6.2 yards per attempt for four touchdowns and six interceptions.

Either way, they’ll try and get the ground game going between Kevin Mensah and Art Thompkins, who are both averaging at least 4.6 yards per carry. The problem is that UConn QBs have been sacked 18 times, hurting the team’s average yards per carry.

It’s rarely a good idea to bet on UConn football, but with Navy possibly looking ahead and this game at home and under the lights, there are reasons to take the underdog.

The over is 6-1 in Navy’s last seven against a team with a losing record, while the under has hit in UConn’s last four following a straight-up win. The favorite has covered in the last four meetings between these teams with that dating back to 2002.