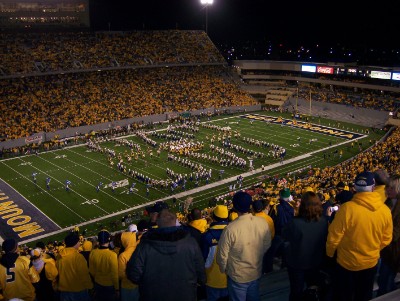 These teams have the same records, but that’s about all that’s the same between them. Texas has hopes of winning the Big 12, while West Virginia simply wants to make it to a bowl under new head coach Neal Brown. The Longhorns were -11 point road favorites with an over/under of 60 early in the week.

The best thing going for West Virginia is that Texas’s next game is against Oklahoma, which means looking ahead isn’t out of the question. And while some may look to last year’s result as a reason to take WVU, this is a completely different team than the one that won 42-41 in Austin.

For starters, Austin Kendall is far from the quarterback that Will Grier was for the Mountaineers. Kendall hasn’t shown much against mediocre competition, averaging 6.0 yards per attempt for six touchdowns and three interceptions.

His top two receivers in Sam James and T.J. Simmons are both averaging less than 10.5 yards per reception. Because of that, it makes sense the Mountaineers would try and run the ball as much as possible, but they’re averaging 3.3 yards per rush as a team (8 sacks included).

While they ran for 232 yards in last year’s meeting, it’ll be hard to trust Kennedy McKoy who is at just 3.1 yards per carry.

It’s not like Texas has an elite defense, but WVU struggled to consistently move the ball against Kansas last week. That said, there’s a reason the Longhorns didn’t cover last week, as their defense has less talent than a year ago and that could lead to closer games than they want this season.

Then again, the last time WVU faced an offense as good as this Texas one, it lost 38-7 to Missouri. Quarterback Sam Ehlinger has been awesome in the early season and if it weren’t for the loss, he’d likely be in the Heisman discussion, completing 72.9% of his passes for 15 touchdowns and just one pick.

Slot receiver Devin Duvernay has been a big part of that with 39 receptions in four games. While they don’t have a dominant ground game, Keaontay Ingram is still averaging a solid 5.4 yards per carry with Ehlinger at 4.5 ypc with six sacks included.

Texas is better on both sides of the ball and on the right day, could win this matchup by 30 points. However, playing at West Virginia with the Red River Showdown the following weekend, there are reasons to take the underdog, especially coming off a bye week.

The Longhorns have failed to cover their last four following a straight-up win and the under is 9-2 in their last 11 on the road against a team with a winning home record. The Mountaineers are 3-0-2 ATS in their last five games at home and the over has hit in their last six in conference play.