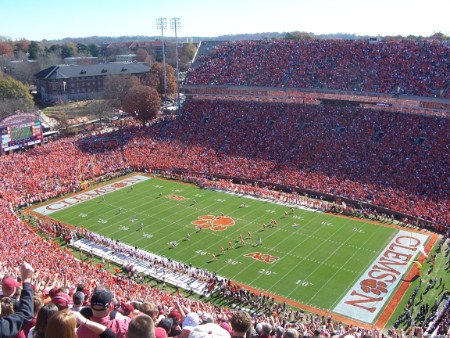 According to records, this may be Clemson’s hardest test of the season in its division. That’s not saying much, but Wake Forest has at least had some good results this year. The Tigers were still hefty -33.5 point home favorites with an over/under of 58.5 on Tuesday.

This isn’t the same Wake Forest team as a year ago, but it’s hard to completely ignore last season’s 63-3 beat down. Not to mention, the Demon Deacons haven’t looked good on the road, losing 36-17 at Virginia Tech last week and barely beating Boston College in their only other road ACC contest.

They’ve played good defense at times, but the 62-59 loss to Louisville stands out, as does the loss to VT in which they allowed 228 rushing yards. The Deacons are allowing 4.2 yards per carry and 164 rushing yards per game, which probably isn’t good enough for this matchup.

Trevor Lawrence isn’t having the best season, but Travis Etienne is averaging a ridiculous 8.9 yards per carry for 1,214 yards and 13 touchdowns. Given Wake’s defensive numbers, Etienne could have another field day in which he goes for at least 100 yards with 200 on the table.

Of course, they still have to deal with Lawrence, who has three touchdowns in each of the last five games and is averaging 9.1 yards per attempt to top receivers Tee Higgins and Justyn Ross. After struggling against VT, not many will think Wake’s defense can keep Clemson below 50 points considering it has hit at least 45 in its last five.

For Wake to cover, it will have to score, something recent opponents haven’t been able to do against Clemson, who is allowing 251.5 total yards and 11.5 points per game. The one time the Tigers slipped up was against UNC and even then they allowed just 20 points.

The problem with the Demon Deacons is that while they have a couple big games, they’ve also been prone to struggling without much of a rushing attack. They’re averaging 3.9 yards per carry even though quarterback Jamie Newman has ran for close to 400 yards if you take away sacks.

Cade Carney leads them in rushing with 429 yards on 3.9 ypc and that probably won’t work in this game. It’ll be up to Newman to sling the ball, though it’s a wonder how much time he’ll have against this defense.

He’s averaging 8.1 yards per attempt for 22 touchdowns, but has had an interception problem in recent outings and it wouldn’t be surprising if Clemson just double teamed top wideout Sage Surratt (1,001 yards, 11 TDs).

If the Tigers take Surratt out of the game, it’ll be tough for Wake to hit 20 points and there’s a decent chance it finishes with closer to 10. If that’s the case, covering shouldn’t be a problem for Clemson unless Wake’s defense plays its best game of the season.