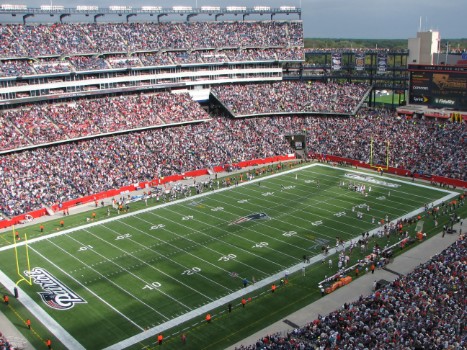 The New England Patriots are a 3-point favorite hosting the Kansas City Chiefs in a rematch of last season’s AFC title game. The total for this big AFC matchup is sitting at 48.5.

The public has backed the Chiefs in this one, but not by much, as they opened as a 3.5-point underdog and as of Thursday are a 3-point underdog.

The Chiefs have won two in a row and three of their last four games and are coming off a 40-9 blowout win over the Oakland Raiders in their last game. They have a two-game lead over the Raiders in the AFC West and while last season they had home-field advantage in the playoffs that is very unlikely this season.

The Patriots are coming off a 28-24 loss to the Houston Texans and many are jumping off the New England bandwagon. Tom Brady has not played well, and he does not have many weapons at his disposal. However, it is not all on the GOAT, as the defense has had their issues as well and has given up at least 28 points in two of their last four games.

The underdog has covered the spread in four of the last five games between these teams.

While the Patriots are a perfect 5-0 at home this season the Chiefs are 5-1 on the road.

In the Chiefs’ last game, they routed the Raiders 40-9 even though they were outgained 332 yards to 259 yards. However, they scored two defensive/special teams TD’s and forced three turnovers and did not commit any.

Patrick Mahomes only passed for 175 yards with a TD and out of the 96 yards KC rushed for Darwin Thompson led them with 44 yards.

Mahomes has not put up big numbers in the last two games but the Chiefs won both games outscoring their opponents 64-26. Last season in the AFC title game against the Pats Mahomes he passed for 295 yards with three TD and no INT.

New England’s defense ranks 2nd in the league against the pass and 5th against the run, but they gave up three passing TD in the loss to the Texans in their last game and allowed Houston to go 3/3 in the red zone.

Brady has to get Offense Going Earlier

In the Pats loss to the Texans in their last game they outgained them by a wide margin (448 yards to 276 yards) but did not play good D in the red zone and only scored nine points in the first three quarters.

Brady passed for 326 yards with three TD and one pick and Julian Edelman and James White combined for 204 receiving yards. Brady has passed for 3,268 yards with 18 TD and six INT on the season and those are solid stats, but he still only ranks 17th in the league in QBR.

Brady has not gotten much help from the run game, as the Pats rank 21st in the league in rushing yards per game. Lead rusher Sony Michel has rushed for 130 yards in his last two games but is only averaging 3.5 yards per carry.

The Chiefs’ defense has only given up 26 points in their last two games and on the season they rank 16th in the league against the pass and 30th against the run.

Many are writing off Brady thinking his days as an elite QB are done. That may be the case but he will look like the Brady of old in this game. He will play well, the Pats will have success at running the ball, and the defense will have a good game. At home, New England will show they are still a legit Super Bowl contender by winning this huge AFC matchup and covering the spread.