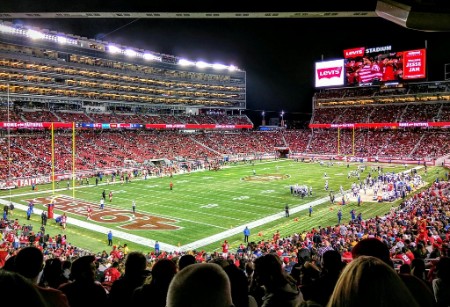 The Panthers put their four-game winning streak on the line facing the undefeated 49ers, who are a 5.5-point favorite.

The Panthers are coming off a bye week and in their last game they beat the Tampa Bay Buccaneers 37-26 where their offense was not great, but their defense forced a whopping seven turnovers.

Kyle Allen has led the Panthers to four straight wins, and he has been named the starter for this game even though it looks as of Cam Newton is close to returning to action.

The 49ers are coming off a weather marred 9-0 win over the Washington Redskins in their last game. The lone undefeated team in the NFC has the league’s 2nd ranked defense and they have only given up 10 points in their last three games.

In their last game in the win over the Bucs the Panthers were outgained 407 yards to 268 yards and the run game was not there, but the seven turnovers kind of helped.

Allen had a solid showing against Tampa Bay with 227 passing yards and two TD and no INT and on the season, he has seven TD and no INT. Allen is an undrafted free agent and while he has not passed for over 261 yards, he has avoided mistakes.

Christian McCaffery ranks 3rd in the NFL in rushing yards and also ranks 2nd on the Panthers in receiving yards. He had three big games in a row but in the win over the Bucs in the last game he had his worst run game of the season with only 31 yards on 22 carries and also only had 26 receiving yards.

If McCaffery struggles again the Panthers may be in bad shape, as Allen will be facing a 49ers’ pass defense that is the top-ranked unit in the league.

Good Matchup for the Home Team

This game sets up well for the 49ers on offense, as their strength is running the ball while the weakness of the Panthers’ defense is against the run. Carolina has a solid pass defense ranking 7th in the league but against the run they only rank 23rd.

Matt Breida leads the team with 411 rushing yards this season but has been held to 71 yards on the ground in the last two games. However, he may break out in this game and on top of that the 49ers’ backfield also has Raheem Mostert and Tevin Coleman, who have combined for 476 rushing yards.

The Panthers have not faced a great rushing offense in their last four games and San Fran ranks 2nd in the NFL averaging 172.7 rushing yards per game.

Jimmy Garoppolo has been pretty good this season and while he does not have a TD in his last two games and has a pick in each, he ranks a solid 9th in the league in QBR.

Jimmy G has had to deal with a young and decent, at best WR corps on the season but the 49ers recently made a big move trading for veteran WR Emmanuel Sanders.

The 49ers have only covered in eight of their last 25 home games.

The Panthers have covered in their last four games and are on a four-game win streak, but both of those trends will come to an end in this game. The 49ers are playing with a ton of confidence and on the season, they are 2-0 at home. Look for San Fran to pound the ball on the ground and play great D and they will be successful doing both, which is why they will win and cover in this NFC matchup.