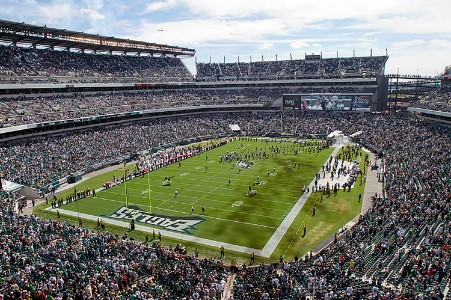 The Eagles have lost two in a row to fall under .500 and they head to Buffalo as a 1.5-point underdog facing the 5-1 Bills.

The public has really backed the Bills in this non-conference matchup, as they opened as a 3.5-point underdog and as of Tuesday are a 1.5-point favorite.

The Eagles were beaten badly in their last game losing to the Dallas Cowboys 37-10 where head coach Doug Pederson guaranteed a win. Carson Wentz has not played well in the last few games and the pass defense has been plain bad. Even the strength of their defense in their run D was less than stellar in the Dallas game giving up 189 rushing yards.

The Bills are 5-1 and in second place in the AFC East but have played a very weak schedule. Not only are their five wins against teams that have a combined six wins but in those five wins they have not played an opponent that ranks in the top 24 in the league on offense.

In the Bills last game, they beat the Miami Dolphins 31-21 where they outscored the Fish 22-7 in the 4th quarter.

The last time these teams met was in the 2015 season.

While the Eagles have failed to cover in five of their last seven games the Bills are 6-2 ATS in their last eight games.

Carson Wentz struggled, once again, in the loss to the Cowboys in their last game only passing for 191 yards and he had three turnovers with an INT and two fumbles. He did put up a lot of yards in his previous game, but he simply has not looked good as of late and that is a big concern.

Jordan Howard is the leading rusher for the Eagles and in the Dallas game he rushed for 55 yards and averaged five yards per carry.

The Eagles have missed the deep-play threat in DeSean Jackson, who has missed the last five games with an abdominal injury. He is listed as questionable but will not participate in the first practice of the week and it is unlikely, he sees the field.

The Buffalo defense was not great in the win over the Dolphins giving up 381 total yards including 272 passing yards.

Not the Best Looking W

In the win over the Dolphins the Bills were outgained by 76 yards (381-305) but had the better ground game and forced two turnovers while committing none. Still, the game was at home and they need a big 4th quarter to keep Miami winless.

The Bills are led by the rushing attack that ranks 7th in the league while their passing offense only ranks 21st.

Josh Allen has been decent this season under center he has seven TD and seven INT and ranks 29th in QBR. He does only have one pick and four TD in his last two games and in the win over Miami he passed for 202 yards with a couple of scores and was not picked off.

Frank Gore leads the run game with 388 rushing yards on the season and has averaged 4.5 yards per carry. He rushed for 55 yards in the Miami game and while the Eagles rank 6th in the league defending the run they were lit up for 189 yards on the ground in their bad loss to Dallas.

Allen does not have a great WR corps and the team is led by the run, but he will face a Philly pass defense that only ranks 27th in the league.

Buffalo is sitting at 5-1 but have played a very weak schedule. They are a good team but not as good as their record indicates. The Eagles will get a good game from Wentz and he will be the key in this non-conference affair. He will avoid the turnover and be solid in the passing attack leading Philly to a win over the Bills in their house.