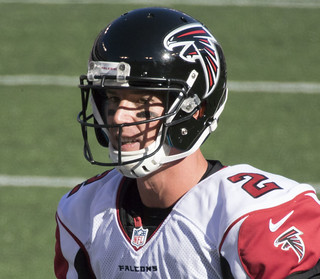 The Rams have lost three in a row and head down south to take on what has to be the most disappointing team in the league so far this season in the Falcons. L.A. is the 3-point favorite in this NFC matchup with a total sitting at 48.5.

The Rams are in a freefall losing three in a row after winning their first three games of the season. However, they just made a HUGE move to improve their defense trading for Jalen Ramsey, who is considered the best cornerback in the league.

L.A. only scored seven points in their last game, which was a 20-7 loss to the San Francisco 49ers. The Rams trail the 5-0 49ers in the NFC West and the defense is not their only issue.

The Falcons have lost four games in a row and while they have scored 65 points in their last two games, they have given up 86 points. The team ranks 26th in the league in overall defense and only ranks 29thaveraging only 73.5 yards per game.

These teams met last season in La La Land in the 2017 Wild Card game where the Falcons beat the Rams 26-13.

The Falcons have covered the spread in their last four games facing the Rams.

Ramsey Cannot Fix it All

Ramsey was a solid pickup for the Rams, but he cannot fix all of their problems. Jared Goff only has 7 TD to go along with 7 INT and he only ranks 27th in the league in QBR. In the 20-7 loss to the 49ers in the last game he passed for only 78 yards and was sacked four times.

The run game has not been there for L.A., as Todd Gurley has looked like a shell of himself and he missed the last game with an injury. In the last three games he has played he failed to average over 3.4 yards per carry. Not only is Gurley questionable for this game but backup RB Malcolm Brown is as well.

The run game has struggled, and Goff may have to step up an do it all. He has to forget about the bad loss to the 49ers and the Rams do rank 6th in the league in passing yards per game.

Goff has the targets with the likes of Cooper Kupp (522 yards), Robert Woods (355 yards) and Brandin Cooks (343 yards) and they will face an Atlanta pass defense that ranks 27th in the league.

Ramsey is set to play in this game and the team is hoping he can give a boost to the slumping defending NFC champions.

Ryan, and that is about it

Matt Ryan ranks 2nd in the league in passing yards and has played well but that is about all the good news for Atlanta so far this season.

In the Falcons last game, they lost to the Arizona Cardinals 34-33 and if there is one silver lining to the loss is that RB Devonta Freeman rushed for 88 yards averaging a solid 4.6 yards per carry after totaling 58 rushing yards and failing to average over 2.7 yards per carry in his previous two games.

Austin Hooper and Julio Jones combined for 225 receiving yards in the loss to the Cardinals and it will be interesting to see if Ramsey will be covering Jones.

Things do not get any easier for the Falcons after this game facing the Seahawks, Saints, and Panthers in their next three games.

While the Falcons have covered in their last four games facing the Rams the Favorite is 9-2 ATS in the last 11 games between these teams and the road team is 4-1 ATS in the last five meetings.

Both teams have really been struggling and each has major issues on both sides oof the ball. I think the addition of All Pro Ramsey will be a shot in the arm that the Rams need to get back on track. Goff will have a big game, as will Ryan, but the L.A. defense will come up with some big plays and the Rams will win on the road and cover snapping their three-game skid.