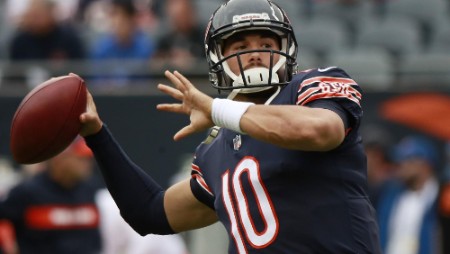 In the Monday night game, the winless Washington Redskins are at home and a 4-point underdog facing the Bears with a total sitting at 41.5.

The public has been betting evenly on this Monday night matchup with the Bears opening as a 4-point favorite, which has not changed.

The Bears are coming off their first win of the season in their last game beating the Denver Broncos 16-4.

The Redskins fell to 0-2 in their last game losing their 2nd in a row to a NFC East foe falling to the Dallas Cowboys 31-21.

These teams last met in the 2016 season.

While the road team is 7-2 ATS in the last nine games between these teams the Bears have failed to cover in their last five games against the Redskins.

In their last game the Bears beat the Denver Broncos 16-14 marching down the field with seconds remaining and kicking a game-winning 53-yard field goal. The Bears were staring 0-2 in the face before the comeback win where they gave up 11 points in the 4th quarter.

The Bears only had 273 total yards in the game and Mitchell Trubisky only passed for 120 yards, but he engineered the last drive and converted a 4thand 15 to put the Bears in FG range.

The Bears’ offense has not looked good only scoring 19 points after two games. They did run for 154 yards in the win over Denver, but 46 came on one play and David Montgomery led the team with 62 rushing yards but only averaged 3.4 yards per carry.

Chicago is, obviously, led by their defense, which has given up the 4thfewest yards and only allowed an average of 68.5 rushing yards per game. The offense has been the issue, but at least in this game they will face a Redskins’ defense that has given up the 3rdmost yards after two games.

In their last game the Redskins’ defense struggled yet again losing to the Dallas Cowboys 31-21. They have given up at least 31 points in each of their first two games and in the loss to Dallas they were outgained by 219 yards (474 yards to 255 yards).

The Skins have played two teams with solid offenses in the Eagles and Cowboys and now get a struggling Chicago offense.

Washington’s pass game with Case Keenum and a less than stellar WR corps has not been bad, but the run game has. In two games Washington has rushed for a grand total of 75 yards. To put that into perspective there are 37 RB’s in the league that have more rushing yards.

Keenum passed for 221 yards with two TD and no INT and he has passed for 601 yards with five TD and no picks on the season. He has played well with no help from the run game and the obvious defensive issues.

The Redskins defense has been bad and their run game, or lack of it, has been worse. They have failed to cover in four of their last five home games and that trend will continue.