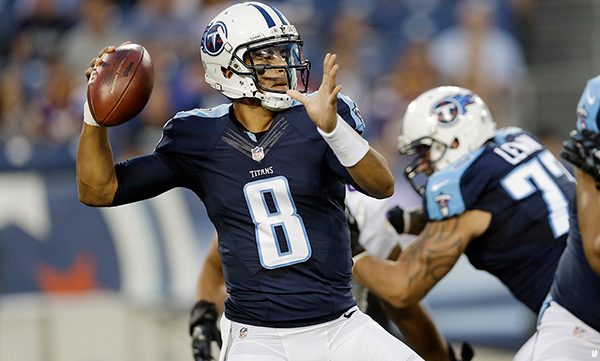 Another much anticipated week 1 NFL match up from a betting perspective will be the Cleveland Browns hosting the Tennessee Titans as -5.5 favorites with a total of 45.5.

The Browns are in off a 7-8-1 season a year ago. Not too shabby considering the previous 2 seasons were 1-15 and 0-16. Thank you Baker Mayfield.

Aside from giving fans hope, the Browns also made bettors happy last season. They were 10-6 against the spread. Those results were highlighted by going 8-4 as an underdog ATS and 4-1 as a home underdog against the number.

The Titans turned in another respectable 9-7 season. They have been 9-7 for 3 straight years. Sometimes, 9-7 is good enough to make the dance as in 2017. Last season, it wasn’t.

For the Titans, it all came down to the final week where is was a win and in game against the Colts. Instead, they lost and were out. The final was 33-17 in favor of the Colts. The Titans watched the playoffs from the comfort of their own living rooms.

Browns fans have good reason to be excited. 7 wins is something you can build off of and the Browns did just that in the off-season.

The move that grabbed most of the headlines was acquiring the services of Odell Beckham Jr from the Giants. One thing sure to make a great QB even better is a great receiver. Mission accomplished.

Add another running back to the mix in Kareem Hunt. Then, Sheldon Richardson and Olivier Vernon on the defensive side of the ball and the Browns are sending a message. That message is, rebuilding is over. We’re ready to win NOW.

But in this week one match up, it might be the Tennessee Titans that are in better position to win NOW. This team has been a consistent 9-7 for 3 straight seasons. A tweak here and there may be all it takes.

With that in mind, there were no groundbreaking off-season moves for the Titans. They brought in a quality QB in Ryan Tannehill just in case Mariota goes down. They also grabbed free agent receiver Adam Humphries from the Bucs which should pay dividends immediately.

The Titans also made moves to improve the offensive line which was a problem last year. They did so with the addition of Rodger Saffold from the Rams.

From a betting perspective, please remember, this is being written in June. Lot’s can happen between now and September 8th. The early betting action is favoring the Browns by about a 60/40 margin.

The game opened up at betonline as Browns -4.5 and has climbed to -5.5. Our score prediction model would support that move. Using the last 7 games of the season as a data parameter, when the Browns went 5-2 and the Titans 4-3.

The predicted score is 25-17 Browns. Using the entire season as a data parameter, the predicted final is 20-18 Browns. Then, you have to factor in the off-season moves.

The feeling here is that all of the hoopla surrounding the Browns and Odell Beckham Jr could inflate this line even more than it already is by game time. That creates some additional value on a Titans team that already figures to be very competitive this year.

We prefer to wait for a +6 to show up. Mark us down for the Titans +6 or better in a game that should be decided late, by a nose.