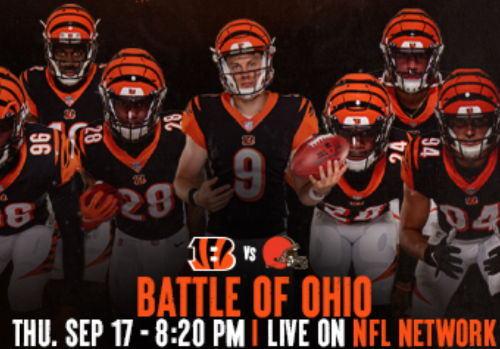 Both the Bengals and Browns lost their opening game of the season and the loser of this Thursday night game will be in a quick 0-2 hole. The Browns are a 6-point home favorite against the Bengals with the total sitting at 45.

The early public money has been on the Bengals in this game, as they opened as an 8.5-point underdog, and as of money morning are a 6-point dog. Not too surprising since they almost got the win in their opener while the Browns were crushed by the Baltimore Ravens.

In their season opener, the Bengals were at home and lost to the L.A. Chargers 16-13. The game looked like it was headed to overtime but the Cincy kicker missed a 31-yard field goal at the end of the game.

The Browns had a less than stellar opening game losing to the Ravens on the road 38-6. It was a mistake-filled game for Cleveland, who split their two games facing the Bengals last season.

Burrow Gives His Performance a D

Top pick Joe Burrow gave his first career start a grade of a D but he did lead the Bengals on a 70-yard drive at the end of the game to set up the missed field goal that would have sent the game to OT. He ended up 23/36 for 193 yards with no passing TD, he did run for a TD, and one pick.

Joe Mixon rushed for 69 yards but only averaged 3.6 yards per carry.

The Bengals did play good defense for three quarters but gave up 10 points in the fourth quarter. The team gave up 155 rushing yards and they have to shore up that run D for this game, as while the Browns were schooled in their opener they did rush for 137 yards.

A.J. Green led Cincy with 51 receiving yards. Burrow had some solid moments but also missed Green and fellow WR John Ross overthrowing to them in the end zone in what should have been a couple of touchdowns.

Mistakes killed the Browns in their bad 38-6 loss to the Ravens in their opener and not only did they have three turnovers but missed two kicks and muffed a fake punt. Cleveland was only outgained 377 yards to 306 yards but the mistakes killed them.

Baker Mayfield was picked off on his first drive and overall was 21/39 for 189 yards with one TD and one INT. Odell Beckham Jr. was targeted 10 times but only had three catches for 22 yards and also dropped an easy third-down pass.

The Browns were down quick in the loss and had to go to the air to come back. They had a good game on the ground with Kareem Hunt and Nick Chubb combining for 132 rushing yards and each averaged over 5 yards per carry.

Cleveland., obviously, needs to limit their mistakes and lean on the ground game more against the Bengals.

The Browns have a secondary that is already depleted by injuries. In the loss to Ravens, they gave up 270 passing yards and three passing TD but played the run pretty well giving up 107 rushing yards on a 3.6 per carry average.

Cincy has covered the spread in eight of their last 11 games as a road underdog while the Browns are 3-0-1 ATS in their last four games as a home favorite.

For some crazy reason, I have faith in the Browns and Mayfield, and even through Burrow may go big against the Cleveland secondary have to go with the home team. The Browns will get their first win of the season in a solid all-around game and their run game will be the key. They will not get down early and in the second half, they will pull away winning and covering.

We’re going to disagree with Jason here. Not a strong call, and likely best to take a wait and see approach with both of these teams.

However, we’ve got one team who scored 6 points last week favored over another team that scored 13. Not exactly a pair of blistering offenses. Just not comfortable laying the 6 with the Browns.

So, we’ll make two plays here. We’ll take the dog and we’ll also go under the total of 43.5, hoping these offenses continue to struggle.