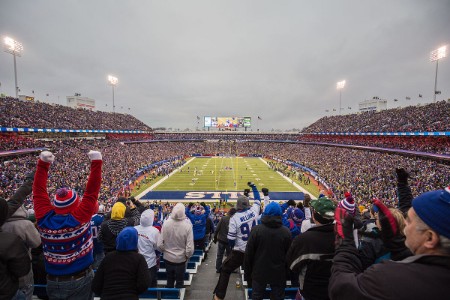 The Rams head to north New York to take on the Buffalo Bills in a non-conference matchup between two 2-0 teams. The Bills are the 1.5-point home favorite with the total sitting at 47.5.

The public has backed the Rams a tad in this game, as they opened as 3-point underdogs, and as of Wednesday morning are a 2.5-point dog.

It is a little surprising the Rams are 2-0, as many thought they were trending down heading into the season. However, they have beaten two legit teams in the defending NFC champion Eagles and the Dallas Cowboys, who many had pegged for a big season.

It is not that surprising that the Bills are 2-0 facing two pretty weak teams in the New York Jets and Miami Dolphins. However, what is a little surprising is that QB Josh Allen leads the league in passing yards and has six TD and no INT after two games. He has been pretty good in his first two seasons, but the Bills have been legit in that time mainly because of the team’s defense.

The next few games may show if the Bills are contenders, as after the Rams they face the Raiders, Titans, and Chiefs.

The Rams are off to a solid start and they need to keep winning, as in the tough NFC West the Cardinals and Seahawks are also 2-0, and the reigning division champion 49ers are 1-1.

In the Rams’ last game they beat the Philadelphia Eagles 37-19 on the road and racked up 449 yards of offense, forced three turnovers, and held the Eagles to three points in the second half.

In the win over the Eagles, Jared Goff passed for 267 yards with three TD and no INT. This after a no TD and one pick performance in the Week 1 win over Dallas.

The L.A. defense has not given up more than 19 points in either of their two games. Micah Kiser ranks fourth in the league in tackles and was a monster in the win over Philly with 16 tackles and 11 solo tackles.

Allen Has Coming Out Party

Allen leads the league in passing yards and in the Bills 31-28 win over the Dolphins in their last game he lit it up with a career-high 417 passing yards with four TD and was not picked off. It has helped that he finally has a legit #1 WR with Stefon Diggs, who leads the NFL in receiving yards.

Buffalo racked up 524 total yards in the Miami win and while they did give up 410 yards they held the fish to 99 rushing yards.

The Bills are at home and riding high, but they did give up 28 points in their last game and have not beaten a good team. That will change in this game. The Rams will put up a fight but Allen and the Buffalo defense will get it done and the Bills will win a close one and cover the spread to remain undefeated.