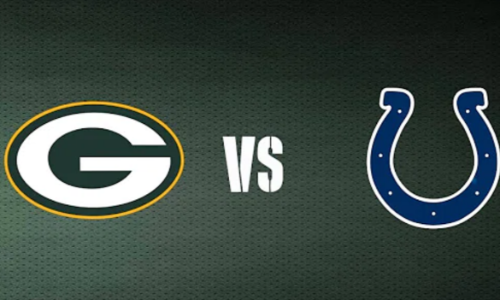 In a marquee non-conference matchup in the nation’s heartland the Indianapolis Colts host the Green Bay Packers. The visiting Packers are a 2.5-point favorite with a total of 51.5.

The public has really backed the Packers in this game even though they were less than impressive in their last one. They opened as a 2.5-point dog and as of Wednesday are a 2 point favorite.

The Packers have won two in a row and three of their last four games but did not look very good in their last game at home where they narrowly beat a one-win Jaguars team 24-20.

The Colts have won three of their last four games and they scored a huge win in their last game beating the Tennessee Titans 34-17 pulling into a tie with them for first place in the AFC South.

Green Bay is in first place in the NFC North at 7-2 and are the only team in the division over .500. Aaron Rodgers is putting up MVP numbers and the Packers are the third-highest scoring team in the league. However, if they play like they did against the Jags they will likely be staring at their third loss of the season.

Indy ranks in the middle of the pack in terms of ppg but their scoring defense ranks third in the league giving up an average of 19.7 ppg.

While Aaron Rodgers had a good game the Packers beat a weak Jags team by only four points as a 13.5-point favorite.

Aaron Jones has not had the season, so far, he had last year, and in each of his last three games have averaged less than four yards per carry.

The Colts have a decent, at best, pass rush, but they have the league’s second-ranked pass defense and you can bet that unit will be tested by Rodgers.

D Comes Up Big in Second Half

In the Colts big 34-17 win over the Tennessee Titans in their last game their defense came up big in the second half shutting out Tennessee. Indy racked up 430 yards in the game holding the Titans to 294 yards and 3 for 10 on third down.

Phillip Rivers was legit in the win over the Titans with over 300 passing yards and a TD with no INT. He has seven TD and only one pick in the three wins in the Colts last four games. It helps that he is playing behind what may be the best offensive line in football and their main goal is to keep Za’Darius Smith, who is among the league leaders in sacks, off the less than nimble Rivers.

Nyheim Hines rushed for 70 yards and a TD, as well as having 45 receiving yards and a TD, in the Tennessee win. He and Jordan Wilkins and Jonathan Taylor helped the Colts average 5.8 yards per carry and face a Green Bay run D that gave up over 100 rushing yards in the last game.

Indy has a good WR corps and rookie second-round pick Michael Pitman Jr. had his best game against Tennessee with 101 receiving yards on seven catches.

The Packers have covered in four of their last five road games but the Colts are 5-2 ATS in their last seven games as a favorite.

Indy has a solid team with a great defense, but the Packers have Aaron Rodgers. The packers will bounce back from a lackluster win over the Jags in their last game and put it together in this one. Rodgers will be big and get some help for a change and Green Bay will win and cover and have a game, which will show the team is a legit Super Bowl contender.