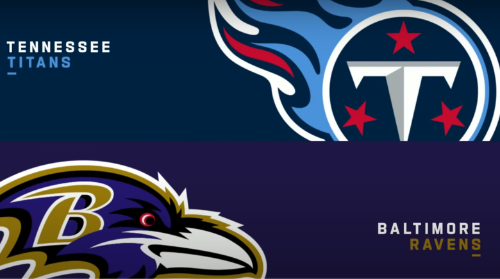 The Tennessee Titans head back East to face the Baltimore Ravens in an AFC matchup between two slumping teams. The Ravens are a 5 point home favorite with the total sitting at 49.

Since opening the line has not changed but the total has moved from 47-49.

After a 5-0 start, the Titans have lost three of their last four games. Their D has struggled in the losses and their last loss to the Colts was a costly one dropping them into a first-place tie in the AFC South with Indy.

The Ravens have lost two of their last three games and while the team had a great offense last season that has not been the case this season. He team is banged up, Lamar Jackson has not repeated his MVP performance of last season, and the offense just seems out of sync.

Last season these teams met in Baltimore in the playoffs where the Titans upset the Ravens beating them 28-12 and bottling up Jackson.

The Titans covered the spread in the playoff win over Baltimore last season, but they have failed to cover in their last four road games.

Lost in the Second Half

In their 34-17 loss to the Colts in their last game, the Titans were outgained 430 yards to 294 yards and they were outscored 21-0 in the second half.

Derrick Henry ranks second in the NFL in rushing yards and he has rushed for over 100 yards in two of his last three games. He has been up and down lately but in this game will face a Ravens run defense that was torched in their last game giving up 173 rushing yards.

Baltimore’s defense has dealt with injuries and their run defense will be vital for them in this game.

Jackson and the Ravens; offense has not clicked on the season and while ranking second in the league in rushing yards per game only had 115 in the 23-17 loss to the Patriots in their last game.

Jackson has been decent as of late but not the dynamic player he was last season. He has failed to rush for over 65 yards in the last three games and has been sacked 11 times in the last four games.

The team’s rushing leader is Jackson and they have Gus Edwards, J.K. Dobbins, and Mark Ingram is back.

The Ravens are looking to get back on track facing a Tennessee defense that has given up an average of over 30 ppg in losing three of their last four games.

The Ravens have taken their lumps as of late, but the Titans have taken more. Baltimore will figure it out in this game, where I see Jackson having a big game. The Ravens will get their payback against a Titans team that knocked them out of the playoffs last season. Baltimore will have a good game plan and while they will give up the rushing yards the team will have balance and take this game covering the spread in their house.