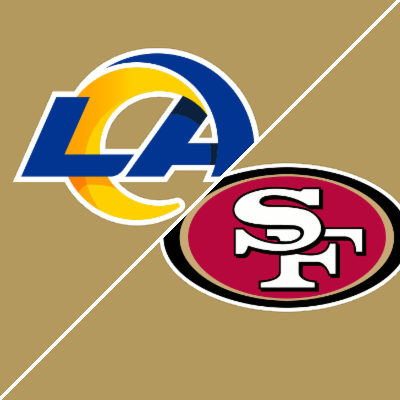 On Monday night the Rams head to the City by the Bay, well Santa Clara, to take on the 49ers, who are in desperate need of a win.

Oddsmakers have the Rams as a 4-point favorite in this NFC West matchup with a total of 49. As of Friday, the total and the spread have not changed since opening.

In their last game the Rams had their four-game winning streak snapped with a surprising 28-16 loss to the Tennessee Titans. The team held a Derrick Henry-less Titans team to only 194 yards but Matthew Stafford had two picks in the span of 20 seconds and one of which was taken back for a TD.

The 49ers were at home in their last game and lost to the Arizona Cardinals 31-17. They were pushed around all game and gave up 31 points and 437 yards even though they were facing Colt McCoy with Kyler Murray out with an injury.

This is the first game between these division rivals this season and last season even though they made the playoffs the Rams lost both meetings.

The big news for the Rams is they won the Odell Beckham Jr. sweepstakes but it remains to be seen if he will be ready for this game.

OBJ will join an already solid WR corps, as Cooper Kupp leads the NFL in receiving yards (1,009) and Robert Woods has been solid with 556 receiving yards. The Rams showed they are all in this season first signing Von Miller and now OBJ.

Matt Stafford leads the league in passing yards and QBR and while he passed for nearly 300 yards with a TD in the loss to the Titans the two picks hurt.

Darrell Henderson Jr. (562 yards 5 TD) leads the Rams ground game and has 145 rushing yards in the last two games. While the Rams pass the ball the second most times in the league Henderson Jr. may see a lot of action, as the 49ers only rank 26th in the NFL in run defense but fourth in pass defense.

Likely a Must Win

The 49ers are sitting at 3-5 after losing five of their last six games and this may be a must win game for them.

Jimmy Garoppolo (1,75 yards 8 TD 5 INT) passed for 328 yards with two TD in the loss to the Cardinals but also had an INT, which was one of three turnovers in the game. He has a decent WR corps led by Deebo Samuel and while he ranks second in the NFL in receiving yards (882) he only had 63 in the last game while having 271 in the previous two games.

Elijah Mitchell (469 yards 3 TD) is the only 49ers RB with over 135 rushing yards. He is listed as questionable for this game with a ribs injury and he had rushed for 244 yards in two games before the last game where he only rushed for 36 yards.

The Rams rank seventh in the NFL defending the run and 17th defending the pass. Miller has 4.5 sacks and while listed as questionable with an ankle injury he should play his first game for L.A. in this one.

While the Rams are only 3-8 ATS in their last 11 games facing the 49ers do not look for that trend to continue.

Stafford’s two picks last week were more than costly but he will bounce back in this game. He has all the weapons and the defense will play well like they did even in the loss to the Titans giving up fewer than 200 total yards. Jimmy G and company may keep up for a while but L.A. has too much talent on both sides of the ball and that will show. The Rams will get over the bad loss last week and beat the 49ers and cover the spread.