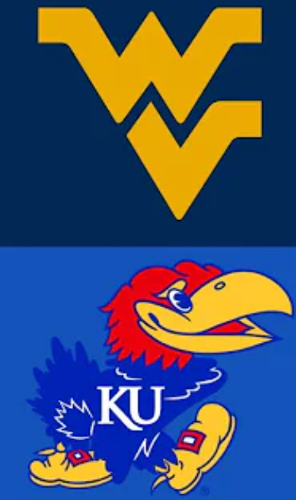 Neither Kansas nor West Virginia have seemed to figure things out this season, both sitting with mediocre Big 12 records and on 12 overall wins.

The Jayhawks have struggled with a lack of offensive talent, while the Mountaineers haven’t fully recovered since losing Oscar Tshiebwe a few weeks ago. The spread is close to even, but WVU is a slight favorite mainly because it’s at home.

Kansas won the first meeting 79-65 and while it was tied at the half, the Jayhawks figured something out in the second half and went on two separate double-digit runs.

They won on the back of a balanced team effort as five players hit double digits, including Chrsitian Braun who led the way with 22 points from six made threes.

16 Three’s Unlikely This Time Around

The problem is that Kansas made 16 threes in that game, something that’s unlikely to happen again, considering they rank in the bottom half of the conference in terms of three-point percentage. Without those threes, something else will have to happen if KU wants to sweep this series.

West Virginia has won three of its last four games, but nothing has been pretty. They were lucky to beat Texas Tech at home and then let the Florida game get away from them last weekend. They’re coming off a win, but they failed to cover against a bad Iowa State team.

On the positive side, the Mountaineers should have enough scoring to win this game. Sean McNeil and Miles McBride combined for 43 points in the first meeting and got most of the shots they wanted.

Culver Needs to Work the Paint

The question is if Derek Culver can get anything going in the paint after being held to eight points and eight boards in that loss. He’s averaging 14 points and 10.4 boards per contest and needs to work the paint for WVU to win games.

Otherwise, the rest of their scoring comes from the guard spot with McBride, McNeil and Taz Sherman, who is averaging 12.4 points per contest.

Their bigger problem has been defense, which is ranked seventh in the Big 12 in terms of efficiency. They let Kansas go off from distance in that prior game and if that doesn’t happen again, they’ll be in business. That’s because the Jayhawks are a little more hit or miss on the offensive end.

Big man David McCormack has done well the last month and is averaging 12.3 points for the season, but production around him has been inconsistent. Ochai Agbaji leads the team with 14.1 points per game, but he’s not someone who will light up a defense and take over a game.

Marcus Garrett and Christian Braun are good players, but they need to be the fourth and fifth options offensively. The issue is that freshman Jalen Wilson has fallen off in conference play and while he’s averaging 12.1 points for the season, he’s gone above 10 points just once in the last seven games.

The Jayhawks have lost their last four true road games and that’s the main reason to bet against them in this spot. It’s not the same team as prior seasons and the Mountaineers should have enough to get the win, assuming KU doesn’t catch fire again. This will likely be a back-and-forth game, but the home team gets the edge in the end.