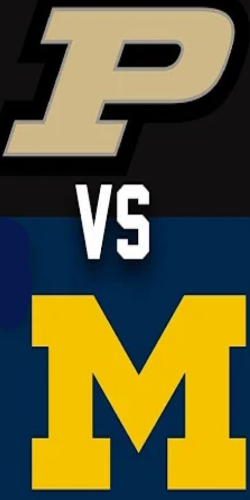 Michigan has been one of the most surprising teams in the early season, sitting at 12-1 overall and ranked as one of the best in the country.

It lost its first game last weekend, but that also came without starting two-guard Eli Brooks. While he’s healthy again, playing on the road is never easy, especially against a Purdue team that has quietly figured things out.

The Boilermakers were 7-5 overall and then started winning games as underdogs, getting late wins against Michigan State and Ohio State, as well as wins against Indiana and Penn State. And while they have five losses, none of those have come at home. Even without fans, they’re hard to beat in West Lafayette.

As for the Wolverines, they’ve had just three true road games all season, two of them against Maryland and Nebraska, two of the worst in the conference, and then the loss against Minnesota.

This game should reveal a lot about each of these teams. Michigan could become the favorite to win the Big Ten with a win, while a win for Purdue would put them in the upper tier of the conference.

The difference between these teams is that Michigan is much more efficient on the offensive end and ranks top 10 in the country in terms of efficiency on both ends of the court. The Wolverines aren’t the deepest team, but they have a little bit of everything, and that’s all you need in college basketball.

Freshman big man Hunter Dickinson is the main reason they’re 12-1, as he’s averaging 15.7 points and 7.5 boards per game, leading the team in both categories. And when he doesn’t produce, everyone else steps up around him.

Isaiah Livers provides veteran leadership, while Franz Wagner has become one of the best two-way players in the conference. Freshman Mike Smith has slowly figured things out at point guard and Eli Brooks is a nuisance for opposing guards.

They have a big man surrounded by four shooters, with everyone able to play lockdown defense. While their schedule hasn’t been overly difficult, they’ve blown out most of their competition.

Purdue has been winning games a variety of ways, but it’s been mostly through Trevion Williams, who needs to win his matchup against Dickinson for the Boilers to have a chance. He’s averaging 15.4 points and 9.5 boards per game, and will need to stay out of foul trouble.

But while he’s a huge part of the team, he’s played just 40 minutes the last two games because Purdue has a 7-foot-4 freshman coming off the bench in Zach Edey, who can also use his size against Dickinson.

The Boilermakers are mediocre offensively because no one else on the team really stands out. Sasha Stefanovic is a pure shooter who can be limited, while it’s rare when Eric Hunter and Brandon Newman both have a good game.

The most-intriguing player for Purdue may be Jaden Ivey, who can look like the best player on the floor when things are going his way. He’s averaging just over seven points in 16.5 minutes per game and he hit the game winner against OSU, and has 34 points in the last three games.

Michigan is probably the better overall team, but Purdue is at home and has the bodies to keep this game competitive if not get the outright win. Williams and Edey will need to hold their own against Dickinson, while the Boilers can’t turn the ball over, something they’ve had an issue with.

Similar to recent Purdue wins, this game will likely come down to the final few minutes. Which big man can win in the paint and will anyone other than Williams step up and score more than 10 points for Purdue?