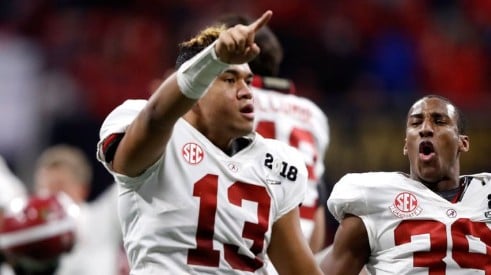 Alabama travels to South Carolina to take on the Gamecocks as 25.5 point favorites, up from a betonline opener of -24. The current posted total is 60.

It’d be a little easier to give the home team a chance if this was late in the season, but Ryan Hilinski started the first game of his collegiate career a week ago after Jake Bentley decided to have a season-ending surgery on his foot.

Hilinski looked great, but that was against Charleston Southern. Due to scoring 72 points in that game, most of the offensive stats are juiced even with the opening 24-20 loss to UNC.

The Gamecocks will try to lean on running backs Rico Dowdle and Tavien Feaster as much as possible, but that probably won’t work even if Feaster reveals all of Clemson’s secrets from last year’s Championship win.

The Tide Yet to be Tested

Alabama has yet to be tested and while South Carolina’s offense could be better than Duke’s, that probably still won’t matter. If the Gamecocks can reach 20 or so points, will they be able to contain Tua Tagovailoa to less than 45?

Tagovailoa has shown no rust this season, completing 76.4% of his passes on 10.4 yards per attempt. Top wideout Jerry Jeudy (240 yards) is simply running past defenses while Jaylen Waddle, DeVonta Smith and Henry Ruggs also have the ability if needed.

Maybe the more surprising part to Alabama’s offense is that its ground game has somewhat struggled. Sure, it’s averaging 6.3 yards per carry as a team, but Najee Harris is at 5.0 ypc and Brian Robinson is at 3.3. Those are surprising numbers and something to keep an eye on once competition picks up.

The other part to the equation is that SC’s defense may not be very good. In the opener, they allowed 10.2 yards per pass attempt and 238 rushing yards to a mediocre UNC offense.

While this game is at home for the Gamecocks, that usually doesn’t matter when Alabama is involved. It’s reasonable to think this game could go exactly like the Duke one but maybe with a few more points to both sides and that means an easy cover for the favorite.

The Crimson Tide have failed to cover in their last four following a straight-up win, while the Gamecocks are 4-1 ATS against a team with a winning record. These teams last played in 2010 so it’s not worth looking at trends in this matchup.

Our numbers have this one right around the current line, however that’s before taking into account the QB change. That may very well put this one over the top for the Tide.

No real opinion here for us so we’re simply going to buck the public, and seemingly the entire world, and take the mountain of points with the Gamecocks, which hopefully becomes even more by kickoff.