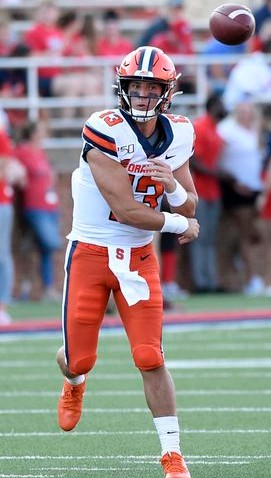 This was supposed to be Clemson’s hardest game of the conference season, but as a -27 point favorite as of Monday, that may not be the case. The question most fans are asking is if Syracuse really is as bad as last week’s 63-20 loss to Maryland or if it was looking ahead to this game.

The answer could be somewhere between the two as the Orange may not be as good as a year ago, but it’s hard not to look ahead to this matchup.

Syracuse gave Clemson its hardest game of 2018, which is saying something. Clemson was a 24-point favorite and then needed a late 94-yard touchdown drive to secure the 27-23 win. It was a similar case the previous year, though Syracuse pulled the home upset 27-23 as a 24-point underdog.

Is Devito the Problem?

It’s worth digging into the lineup. The issue for Syracuse is that quarterback Eric Dungey is no longer around. Tommy DeVito maybe threw a few touchdowns against Maryland, but he also completed less than 50% of his passes and had two interceptions against Liberty.

This Clemson defense may not be at the same level as a year ago, but it just thwarted Kellen Mond and company. If DeVito can’t move the ball, it’s up to the rushing attack, which won’t be a good strategy in this game.

The Orange averaged 2.3 yards per carry in last year’s game and it’s not like running backs Moe Neal and Abdul Adams have had overwhelming success against bad defenses. Syracuse has battled the last couple years, but this may be the time it’s really outmatched.

This is also before mentioning what happened to Syracuse’s defense last week, allowing 63 points to Maryland. The Terps may be a good team this year, but you can’t take away any positives after allowing 354 rushing yards.

Trevor Lawrence still wasn’t the full-time starter when these teams met last year. That’s a relevant piece of information, as is Travis Etienne’s 203 rushing yards and three touchdowns in that game.

In addition to having Lawrence, the Tigers can use their rushing attack the entire way given how Syracuse looked last week. Etienne and backup Lyn-J Dixon should be in for a heavy workload and there’s no reason to think Syracuse will stop that. And then there’s still Lawrence.

A lot of people will back Syracuse based on the results from the last two years, but with DeVito at quarterback, things may be different this time around. If the Orange can’t at least move the chains, that’ll leave more time for Lawrence and Etienne to rack up the points.

Was Syracuse looking ahead to this game? No doubt about it. The media was all over that aspect heading into the Maryland game. How much of a roll did it play? Who knows. Syracuse would have lost either way, but perhaps not as badly.

Football teams have pride. Losing the way they did last week just about guarantees the very best effort Syracuse can put forth this week. Will it be enough? Perhaps.

Our model certainly doesn’t think so, predicting a Clemson blowout. But literally as this is being written, the first +28 has appeared on the board.

We’ll also acknowledge that Devito is no Dungey. However he did come off the bench and contribute to wins last year, most notably against Florida State.

Based on recent history alone, we’re going to grab the 4 TD’s with the Orangemen. College football teams get better or worse each year. However, they don’t go from winning by 3 at home, losing by 4 on the road, to all of a sudden being 4 TD underdogs.