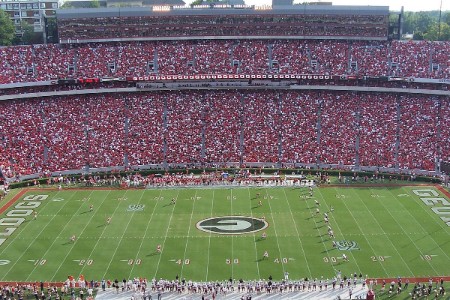 Georgia has yet to be challenged and that trend will likely continue against Arkansas State after it opened as -33 point home favorites. Though it’s worth noting that the Bulldogs play Notre Dame next weekend so there’s a chance they look ahead to the more important game.

Quarterback Jake Fromm doesn’t have overwhelming numbers, but that’s mostly because he hasn’t been needed, which will likely be the case again. He’s completing 9.5 yards per attempt, though has just two touchdowns on 34 attempts.

Most of Georgia’s success can be seen in the rushing numbers as it’s averaging 7.4 yards per carry as a team. D’Andre Swift has 214 yards on 22 carries and will likely have his way against Arkansas State, who has allowed at least 148 rushing yards in each game. Swift, Brian Herrien and Zamir White should all be in for solid performances once again.

The biggest comparison for this game is when Arkansas State lost 57-7 to Alabama last year. The Tide ran for 278 yards and then pretty much bottled up whatever the Red Wolves did offensively even though they still managed almost 400 total yards.

Given that result, it’s somewhat surprising this spread isn’t a little higher. Georgia should run up to 40 points with 50 a decent projection. The question is what ASU’s offense can do.

The Red Wolves haven’t played a relevant defense yet, so it’s hard to take quarterback Logan Bonner’s numbers seriously in his first season as the starter. Either way, he probably isn’t as good as Justice Hansen was in his final year and that’s seen in his early numbers.

Despite playing two weaker defenses, Bonner’s still only completing 62.1% of his passes on 7.0 yards per attempt. Those numbers will take a hit against Georgia and the same goes for running backs Marcel Murray and Ryan Graham.

Bonner may not be an elite quarterback, but if given a passing lane or two, it wouldn’t be surprising if he connected with top receivers Omar Bayless or Brandon Bowling a couple times. If that’s the case, it could be another situation in which Georgia allows a couple touchdowns.

Still, if the Bulldogs reach close to 50 points, that’ll require the Wolves to get a couple touchdowns and that’s not exactly something people want to bet on. The under is 4-0 in Arkansas State’s last four road games and the over is 3-0-1 in Georgia’s last four games on grass.

Two of the three projections our model spits out have Georgia winning by less than 33. The other has Georgia by 36. We’ll combine that with the potential look ahead to Notre Dame and make a small play on Arkansas St +33.5 (likely more by kickoff)