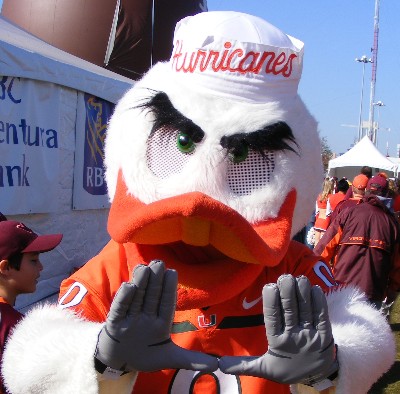 Somewhat surprisingly, Miami is still in the running for the ACC Coastal division, but it has to win its final two conference games. Louisville doesn’t care about that and while it has no chance of winning its division, will pose a good challenge in this one.

The Hurricanes were -7 point home favorites with an over/under of 49 a couple days before the game.

This is an odd spread mostly because Miami has had trouble winning games by more than seven points all season. Sure, it surprised a lot of people and won 27-10 at FSU last week, but it wasn’t entirely impressive, rushing for just 1.7 yards per carry as a team.

Given Louisville’s offense, this game should be close going into the fourth quarter. The Cardinals have been competitive with most teams because their offense has been on another level compared to a season ago. They scored 62 in a win at Wake and more recently, took down Virginia 28-21, who happens to be the current leader in the Coastal division.

However, defense happens to be Miami’s strong suit, allowing 290.1 yards and 18.3 points per game. It’s not like it has played a lot of good offenses in the ACC, but those are solid numbers any way you look at it, especially the 2.8 yards per carry allowed.

That rush defense is Louisville’s biggest concern in this matchup because that’s how it moves the ball. The Cardinals have found a somewhat makeshift offense with Micale Cunningham at quarterback, who has become a presence running the ball with a penchant for hitting long touchdowns.

He’s averaging 11.6 yards per pass attempt, yet has attempted 27 passes in the last three games. While he’ll likely be asked to pass more in this game because of Miami’s rush defense, it’s worth noting Javian Hawkins has had success against good defenses, as seen in the 129 rushing yards against Clemson.

Unfortunately for Louisville, its defense has been bad, allowing 4.7 yards per carry and 31.9 points per game. It played well in the recent win against Virginia, but repeating that on the road will be difficult.

Then again, Miami’s offense has been a mess, though Jarren Williams impressed a lot of people by throwing for more than 300 yards against FSU last game. If he shows up again, this offense could be in business, yet the line remains a question as the Miami QBs have been sacked 35 times.

The Hurricanes might be better off running the ball with DeeJay Dallas against this defense, but while he’s averaging 6.0 yards per carry, he hasn’t ran for more than 66 yards in the last five games.

The ‘Canes put some pieces together in the win at FSU, but there are still reasons to doubt them, namely the first couple months of the season. If Louisville’s offense can move the ball like it has all season, a cover is definitely in the cards for the road team.

The over is 5-1 in Louisville’s last six road games, while Miami doesn’t have any relevant trends. These teams last played in 2014, but the Cardinals have covered the last four meetings with that dating back to 2004.