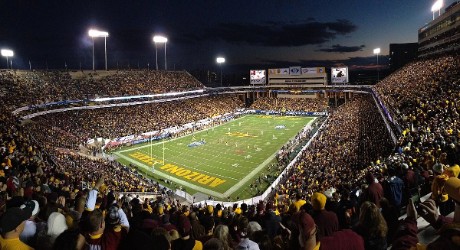 USC’s quest of reaching the Pac-12 title game isn’t over, but it’s on its last limbs. The Trojans likely have to win the rest of their games and that’ll be an uphill battle for a team whose only road win came against Colorado. That’s why Arizona State was a slight -1.5 point home favorite with an over/under of 57 as of Thursday.

USC is coming off a 32-point loss to Oregon and hasn’t looked good on the road. It’s 1-3 with the win being a close 35-31 contest against lowly Colorado. It doesn’t help that ASU won this matchup in Los Angeles last year using a dominant ground game en route to a 38-35 result.

That said, the Sun Devils have had issues of their own, namely losing 42-32 to UCLA last game. And while at home, they also had trouble against Colorado, losing that matchup a month ago.

Arizona State used to be known for defense, but after giving up 42 points to UCLA last game, that may no longer be the case. However, it’s still allowing 3.2 yards per carry and a decent 21.1 points per game.

The one thing USC has been able to do is score on every opponent. Freshman quarterback Kedon Slovis doesn’t have amazing numbers, completing 68.8% of his passes for 7.8 yards per attempt, but he has thrown multiple touchdowns in each of the last four games.

He struggled a bit against Oregon last week, but he shouldn’t be under as much pressure in this matchup. Either way, he’ll be needed because of ASU’s rush defense, though Kenan Christon was good against Oregon and is averaging 7.0 yards per carry, while USC’s other running backs are injured.

The Trojans are underdogs because of their defense, allowing 184 rushing yards and 28.3 points per game. The Sun Devils may not have a good offense, but they’ve exploited bad defenses like those from UCLA and Washington State.

That’s because freshman quarterback Jayden Daniels has been competent against those bad defenses, throwing six of his 11 touchdowns against UCLA and Wazzu. If he can do that in this game, that’s an edge for the home team, though USC’s biggest weakness is against the run, which is where Eno Benjamin steps up.

His numbers aren’t at the same level as a year ago, but he’s gone for 100 yards in each of the last three games, which is pretty good considering defenses know ASU wants to get him the ball.

USC has the better offense, but ASU has an extra week of rest and is playing at home, which may be enough to get another win in this matchup.

The under has hit in USC’s last four games following a straight-up loss, while the under is 5-1 in ASU’s last six following an ATS loss. The road team is 4-1 ATS in the last five meetings between these schools, but the favorite is 6-2 ATS in the last eight.