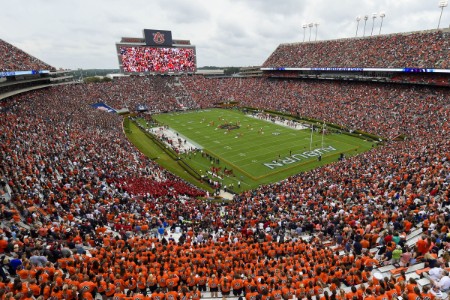 Auburn looks like a legitimate threat in the SEC having already passed its first two tests. There are a lot more to come, but with an unpredictable offense, can’t overlook anyone, including Mississippi State. The Tigers were early -10.5 point home favorites with an over/under of 46.5.

Mississippi State hasn’t done anything particularly well going into this matchup seen in its 2-2 mark against the spread.

It fell at home to Kansas State but then rebounded against Kentucky last weekend. Without one area that truly stands out on the field, it will likely struggle against better teams such as Auburn. That’s seen in the spread because this is the highest number between these teams since 2009.

However, it’s hard to ignore what happened last year because these aren’t vastly different teams. The Bulldogs used a dominant rushing attack en route to 349 yards on 6.1 yards per carry, while their defense stopped Auburn from doing anything in a 23-9 win. It’d be a surprise if that happened again, but it’s not impossible.

Mississippi State had a quarterback question in the middle of the week as regular starter Tommy Stevens was dealing with a shoulder injury. That said, the more mobile Garrett Shrader may be the better option in this offense, as his rushing ability has popped the last couple games en route to 7.4 yards per carry on 30 totes.

Combine that with running back Kylin Hill (551 yards, 6.1 ypc), this offense is a bit more dynamic. Of course, Stevens is the regular starter because he’s a better passer. Either way, they’ll have to move the ball somehow because their defense isn’t as good as a year ago.

While the Bulldogs have a good defense, they aren’t elite and have allowed points to every opponent faced. Their best result was last week against Kentucky who was playing a backup quarterback.

Then again, Auburn has plenty of questions about its offense despite being undefeated. Outside of a couple huge plays against A&M last week, it didn’t get much done, which has been the case in all but one game.

Quarterback Bo Nix hasn’t been asked to do much, but completing 53.8% of passes is going to catch up at some point. So far, he’s done just enough to hold onto a lead (A&M) as well as lead a comeback (Oregon), but it’s a wonder how long that can continue.

The running game is still strong which is why the Tigers are undefeated as JaTarvious Whitlow is averaging 5.0 yards per carry for 408 yards. If they struggle to run the ball similar to last year’s meeting, it’ll be almost impossible to cover.

Auburn is the better team and playing at home, but the questionable quarterback play could be a problem at some point, especially against a team that had its number last year.