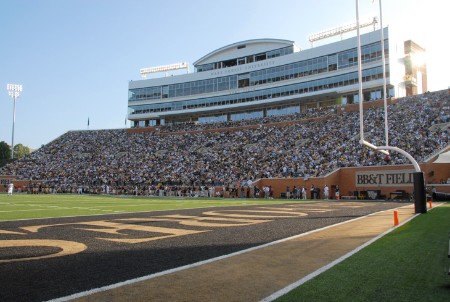 Mack Brown is back. Not many expected North Carolina to be in this spot after two games, especially with an over/under of 4.5 wins. After beating Miami, UNC is suddenly one of the favorites to win the Coastal division, which didn’t seem possible before the season.

Wake Forest is also undefeated, though winning games as a favorite isn’t as impressive. Then again, the oddsmakers still don’t believe in UNC as the Demon Deacons opened as -3.5 point favorites.

The Tar Heels are winning by playing smart football and not being subpar in any facet of the game. Freshman quarterback Sam Howell has taken seven sacks, but has yet to throw an interception while tossing four touchdowns. That’s all you can ask from a freshman starter and that’s what the Heels are getting.

Receivers Dyami Brown, Dazz Newsome and Rontavius Groves have been solid, but it’s the running backs who are leading the way. Javonte Williams is averaging 6.4 yards per carry for 178 yards and that came against two solid defenses.

Wake’s defense is its weakness and that’s where UNC has to win this game. Wake was exploited by Utah State’s offense in its first game and without three interceptions, probably wouldn’t have won. If Howell continues to play safe, the Heels will get their points.

While Wake Forest quarterback Jamie Newman has better numbers (6 TDs, 0 INTs), some of that can be chalked up to playing bad defenses. While this Wake offense can score against most teams, efficiency will likely take a hit in this game.

The other worry is that the Deacons are only averaging 4.1 yards per carry as a team and that includes a 96-yard touchdown run. They’d like to get Cade Carney and Christian Beal-Smith going, but this game will be won by Newman slinging to Scotty Washington and Sage Surratt.

The jury is still out on Newman, who didn’t take over for Sam Hartman until the final four games last year. While he had his moments, he was largely inconsistent, namely in the home loss to Pitt, throwing a couple picks while completing 50% of his passes.

While South Carolina and Miami don’t have elite offenses, it’s still impressive to contain Jake Bentley and limit the Hurricanes just enough to get the win. That said, this will be UNC’s first true road game of the season in addition to Wake possibly having the more potent offense.

While these teams are in the same conference, they haven’t played since 2015 so there’s little to take away from previous matchups, especially with Mack Brown now in charge at UNC.

The over has hit in the last four for UNC against a team with a winning record, while it’s 5-0 in Wake’s last five September games. The home team has covered in the last five meetings between these schools, but that stretches back to 2006.

With the current number -3.5, if you like Wake forest in this game it’s probably best to wait. The majority of the early money is on North Carolina so this line is likely to drop.