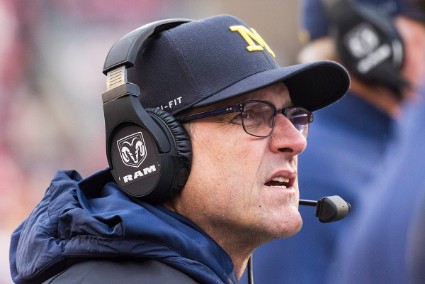 There was a chance that both of these teams would be undefeated in this matchup, but instead, they have a combined three losses.

It’s been a trying season for Michigan, yet losing at Wisconsin and Penn State aren’t the worst things. The same goes for Notre Dame, who lost at Georgia a month ago. The Wolverines were -1 point home favorites with an over/under of 51 as of Tuesday.

It feels like forever since these teams last played, but it was the first game of the 2018 season. The Fighting Irish scored the first 14 points, went up 21-3 and never looked back in a 24-17 win.

It wasn’t the most exciting game to watch as both defenses controlled each side of the ball and neither offense could get anything going. There are a few differences this year in that Brandon Wimbush is no longer Notre Dame’s quarterback and Michigan’s defense isn’t at the same level.

Ian Book is the main reason a lot of people will take the Irish in this spot. He doesn’t have elite numbers, but he’s averaging a solid 8.3 yards per attempt for 14 touchdowns and two interceptions with 188 yards and three more touchdowns on the ground.

His ability to move the ball against good defenses has been key even if he isn’t completely lighting up the scoreboard. The ground game has been equally stout with Tony Jones averaging 7.0 yards per carry and rushing for more than 100 yards in each of the last three games.

The question is which Michigan team will show up. The defense has had issues and while it allowed three points against Rutgers and Iowa, it also let Army do what it wanted earlier in the season. The Wolverines have good numbers, but they’ve been pushed around at times and it wouldn’t be surprising if that happens again.

It’s been a similar case for the Irish, who have had trouble containing the likes of USC and Virginia. But that may not matter because Michigan’s offense has yet to get going. Shea Patterson doesn’t have a touchdown in recent games against Penn State and Iowa, and he’s averaging a mediocre 7.5 yards per attempt with nine touchdowns and four picks for the season.

Notre Dame may not be elite, but there have been no signs that Patterson is going to air it out and win this game by himself. The Wolverines will try and lean on running back Zach Charbonnet most of the way as he has four touchdowns in the last three games and had decent success against PSU last weekend. Considering ND’s weakness is against the run, that could be where Michigan wins this game.

There’s no doubt this will be a tight game throughout and finish within seven points, no matter who wins. Notre Dame is on the road, but it also gets an extra week of rest and Michigan was in Happy Valley last weekend. There are reasons to take both sides, but the better quarterback has been Book and he may be easier to trust.