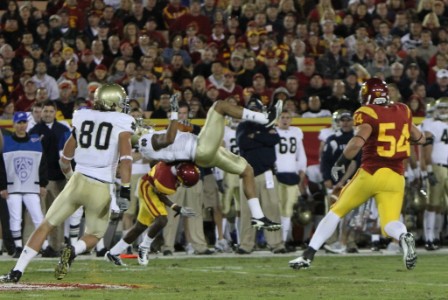 Less than a year ago, a five-win USC team took an undefeated Notre Dame team to the edge. The Fighting Irish went on to win 24-17, but the home team covered for the sixth straight matchup. That’s likely where most will lean this year with the Irish an early -11 point favorite with an over/under of 57.5.

Overall, last year’s matchup was pretty even. Maybe some of that had to do with traveling across the country for Notre Dame or maybe it was something else, but it didn’t have enough to stretch out a lead, especially after going down by 10 points early.

The Trojans have talent, but they’ll also be starting their third-string quarterback in Matt Fink. They’ve lost both of their road games, most recently losing by 14 at Washington.

Notre Dame played last week, but it was mostly a freebie as it won 52-0 against Bowling Green. The Irish defense will likely be what decides this game because they’ve been good in the early season and have yet to allow more than 23 points. That’s not an elite number, but keeping Georgia and Virginia to respectable totals isn’t easy.

USC isn’t really sure what it will get out of its quarterback as Fink led the win against Utah, but then threw three interceptions on 5.1 yards per attempt in the loss to Washington.

He has a nice trio of receivers in Michael Pittman Jr., Tyler Vaughns and Amon-Ra St. Brown, but it won’t matter if he doesn’t have time to get them the ball and it doesn’t help that the Irish are allowing 183 passing yards per game.

The better route for attack may be with Vavae Malepeai and Stephen Carr, who lead the way for USC’s rushing attack, which is averaging 4.2 yards per carry. It hasn’t been consistent, but it will have to be better if USC wants to have a chance.

The Trojans have had some good results defensively, but they’re also allowing 175 rushing yards per game, which could catch up with them in this matchup. The Notre Dame offense revolves around quarterback Ian Book, but running back Tony Jones is averaging 6.9 yards per carry and Book can also get out of the pocket when needed.

If Jones has success, that should mean an even easier time for Book in the passing game as he’s averaging 9.0 yards per attempt for 13 touchdowns and two picks. This isn’t an elite passing attack, but the only mistakes Book has made were in the loss to Georgia.

Playing at home against USC is not equal to playing at Georgia, so he has the advantage in this matchup.

There isn’t a huge talent difference between these teams, but USC is on its third quarterback and the home team has covered in the last six meetings for a reason. It’s not easy to travel across the country in the middle (or end) of the season.

The Trojans are 1-9 ATS in their last 10 non-conference games and the Irish have covered in their last five at home. The over is 4-1 in the last five meetings between them.