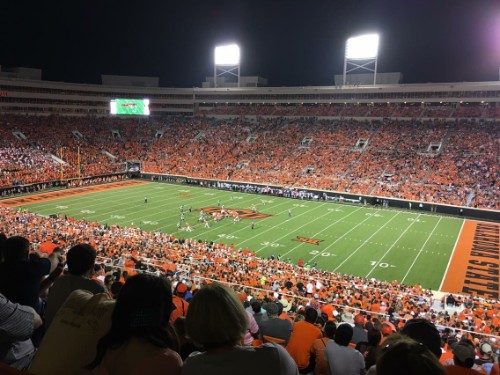 Oklahoma continues to win by the slimmest of margins, yet gets tons of love from the bookmakers every week. That’ll come to an end at some point, but this isn’t the game. The Sooners were -13 point road favorites early in the week with an over/under of 69.5.

No matter the competition, Oklahoma has won recent contests by less than a touchdown, most recently winning by four points at home against a 5-6 TCU team.

The offense is boom-or-bust, while the defense has given up points to everyone. That’s not exactly a recipe for covering against OK State, who have won their last four games, including on the road at Iowa State, as well as by seven points over TCU.

The Cowboys have a fairly simple offensive strategy: give the ball to Chuba Hubbard. The running back has 285 carries for 1,832 yards and 20 touchdowns on 6.4 yards per carry. Oklahoma’s best chance to cover is for Hubbard to slow down because he’s had more than 300 touches in 11 games.

There’s also new quarterback Dru Brown, who did his part last game, completing 75.9% of his passes in the win at WVU. He doesn’t have the same mobility as injured starter Spencer Sanders, but he may be a better pure passer.

Either way, if Hubbard can move the chains, that leads to controlling the clock and keeping their defense off the field, which will be key in this game.

These teams have similar defensive numbers outside of OK State allowing about 80 more passing yards per game. They’re allowing similar point and rushing totals, though Oklahoma is allowing 4.2 yards per carry compared to OK State’s 3.9 mark.

That rush defense could be a problem in this matchup and if OK State can get Hubbard going, it should be able to stay within 10 points.

The Sooners are still scoring plenty but that hasn’t been enough to cover games. Jalen Hurts remains in the Heisman hunt, completing 71.4% of his passes on 11.8 yards per attempt for 30 touchdowns and six interceptions, as well as 1,156 rushing yards and 17 touchdowns on 6.4 yards per carry.

Running back Kennedy Brooks has been the main guy in the back field of late and he’s averaging 7.1 yards per carry. Top receiver CeeDee Lamb is on 999 yards and averaging more than 20 yards per reception and is the guy OK State can’t get beat by.

A lot of people will bet Oklahoma simply because OK State’s backup quarterback is starting. However, that’s usually not a great strategy, especially given Hubbard’s rushing totals and Oklahoma’s iffy rush defense.

Oklahoma has failed to cover its last four road games and last four overall. OK State is 8-2-1 ATS for the season and 9-1 ATS in its last 10 against a team with a winning record.