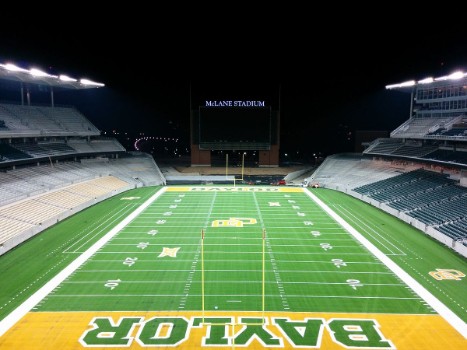 This game could go any number of ways. Baylor is coming off a major letdown against Oklahoma and may not have much motivation a week later. Texas is just 6-4 and is only playing for a better bowl at this point. The Bears are the better team and opened as -5.5 point home favorites with an over/under of 59.

It’s been a long season for Texas fans, mostly because of more disappointing results. Losses to LSU and Oklahoma were at least reasonable, but back-to-back road losses to TCU and Iowa State aren’t great.

The Longhorns have struggled defensively all season and that could cost them in this matchup. Baylor may have the best defense in the Big 12 and its offense has carved up weaker defenses.

While Baylor lost last week, it allowed just 14 points in the first three quarters to Oklahoma, and is allowing a solid 20.5 points per game and 3.5 yards per carry. Texas had what looked to be an elite offense early with Sam Ehlinger at quarterback, but it’s failed to score more than 27 points the last three games.

Ehlinger has been good with 27 touchdowns and eight picks, but his 7.8 yards per attempt is mediocre in college football. Some of that has to do with a nagging hamstring injury for top wideout Collin Johnson, while Devin Duvernay works mostly in the slot.

It also doesn’t help that the ground game lacks explosiveness. Ehlinger is mobile with 428 rushing yards, but the Longhorns average 4.4 yards per carry as a team, while Keaontay Ingram has been hit or miss out of the backfield. Going against this Baylor defense, it could be one of the misses for Ingram, who had nine yards on eight carries against ISU last weekend.

On the other side of the ball, Texas is allowing 4.3 yards per carry and more than 300 passing yards per game. Those aren’t great numbers to have against a balanced Baylor attack. Quarterback Charlie Brewer runs the show, averaging 8.7 yards per attempt for 18 touchdowns and he was the main ball carrier in the loss to Oklahoma, which was a bit different.

Both JaMycal Hasty and John Lovett average more than 6.0 yards per carry, but they combined for four carries against the Sooners. That’ll likely change in this one with Baylor possibly focusing more on the rushing attack.

As long as Baylor doesn’t slip up after its first loss, it has the advantage on both sides of the ball. Texas won this matchup 23-17 last year, but that was a different time for both teams. Texas is worse at about every level defensively and Baylor is better in about every facet of the game.