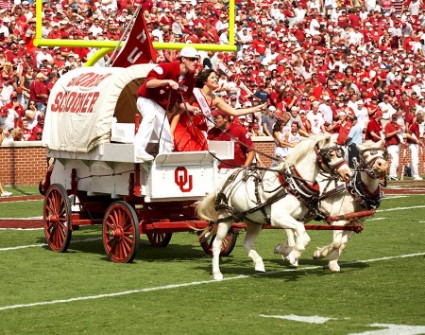 Things haven’t been easy for Oklahoma, yet it looks headed to another Big 12 Championship game and possible appearance in the College Football Playoff if it gets lucky.

TCU has five losses, but it has at least been competitive in most of them. The Sooners were early -18.5 point home favorites with an over/under of 65.

The Sooners are playing with fire and escaped with yet another win against Baylor last week, coming back from a 28-3 deficit. They’ve won their last two by a combined four points and lost to K State before that.

Things haven’t gone as well for TCU, though it held on for a win at Texas Tech last weekend. The Horned Frogs have battled everyone outside of a 49-24 loss at Iowa State and there’s a chance that happens in this matchup.

When these teams met a year ago, Oklahoma ran for 323 yards in a 52-27 win and TCU simply didn’t have enough offense to be competitive.

The Sooners are struggling to defend, which is why their last few games have been close, but TCU doesn’t exactly have an offense to keep up on the scoreboard.

Quarterback Max Duggan was let loose last game en route to 323 yards and a couple touchdowns, but he’s still completing 56.4% of his passes on 6.6 yards per attempt for the season.

The hope is that the ground game works the clock as much as possible in order to keep Jalen Hurts and company off the field. Duggan is a decent rusher averaging 4.0 yards per carry, while running backs

Darius Anderson and Sewo Olonilua have been a solid duo. As a team, they’re averaging 4.8 yards per carry and that’s a good place to start against a defense that is giving up 4.0 ypc.

TCU doesn’t have terrible defensive numbers, but it’s hard to ignore how many points it’s allowing. From the 49 given up at ISU to the 28 allowed in the second and third quarters against Texas Tech last week, this isn’t the same defense as prior seasons, nor is it as good as Baylor’s (who Oklahoma had issues with last week).

Playing at home, the Sooners should move the ball with ease. Hurts continues to stack up numbers, averaging 12.3 yards per attempt for 28 passing touchdowns and five picks to go with 983 rushing yards and 15 more touchdowns.

Even when the offense struggles to move the ball in the first half, it doesn’t matter in the end because Lincoln Riley whips up a new plan and that’s how they beat Baylor.

Even without top wideout CeeDee Lamb last game, Hurts spread the ball around and his receivers didn’t matter. Joining Hurts in the backfield, Kennedy Brooks is averaging 7.5 yards per carry, though on just 81 attempts.

Oklahoma’s defensive lapses have been an issue in recent games, but it won’t be easy to throw money on the underdog because of how inconsistent TCU’s offense has been. The Sooners will get their points, especially at home, so it’s a matter of how many points the Frogs can score.

The over has hit in TCU’s last four games, while Oklahoma is 1-5 ATS in its last six games overall. The under has hit in the last six meetings between these teams played in Norman and the Sooners have covered the last four overall.