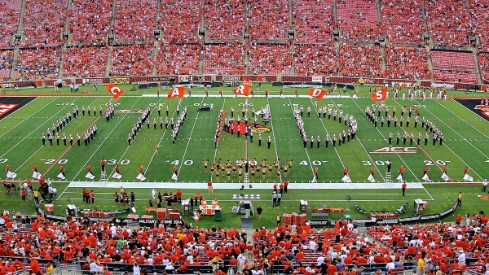 Who is the second best team in the ACC? The debate rages on. Both Louisville and Virginia could fight for that title, but only the latter can make the ACC title game. The Cavaliers were early -3 point road favorites with an over/under of 52.5 for this matchup.

Virginia lost at Miami a couple weeks ago, but still has a half-game lead in the Coastal division and a win here would put them one step closer.

Louisville isn’t playing for the same thing, but is in the midst of a major turnaround under head coach Scott Satterfield with a bowl in sight after finishing with two wins last season.

Neither one of these teams has been consistent, which is why anything could happen in this game. It’s also best to throw out last year’s result since that was a much different Louisville squad.

The main difference between these teams is that Virginia can play some defense, allowing 19.7 points per game compared to Louisville’s 33.4.

That was the difference when UVA beat Duke last week, but playing on the road is always different, as seen in its 17-9 loss at Miami a couple weeks ago.

Still, it’d be surprising if the Cavaliers struggled to move the ball on a defense giving up almost 200 rushing yards per game.

Bryce Perkins maybe hasn’t been as electric as a season ago, but he’s someone that can break open a game with his legs, averaging 4.7 yards per carry if you don’t include the 22 times he’s been sacked.

That said, the offensive line has been a problem all season, hence the sack numbers and that he’s averaging 6.7 yards per pass attempt.

He has some quality wideouts in Hasise Dubois and Joe Reed, but he’s been under pressure more often than not. It doesn’t help that running back Wayne Taulapapa is averaging 4.0 yards per carry, but that may not matter in this game, similar to last week’s win over Duke.

The question is how much Louisville can move the ball against this defense. The Cardinals went from scoring 62 points at Wake Forest to being held to 10 against Clemson. It’s likely it’ll score somewhere between those totals for this game against a defense allowing less than 100 rushing yards per contest.

The Cards have gone with a two-quarterback system between Evan Conley and Micale Cunningham, which has worked for the most part. Cunningham has bigger overall numbers, but they’ve split duties the last three games.

The main beneficiaries have been Tutu Atwell and Dez Fitzpatrick with a combined 11 touchdowns, but their ground game has had a bit more success than UVA’s, averaging 4.9 yards per carry. Javian Hawkins leads the way and he even ran for 129 yards in the loss to Clemson, which is somewhat surprising given the score.

Against weaker defenses, Perkins usually has enough to control the tempo and put points on the board, yet giving more than three points in this spot will be hard to bet. The Hoos may have the better defense, but the Cards have put big numbers up against everyone but Clemson.