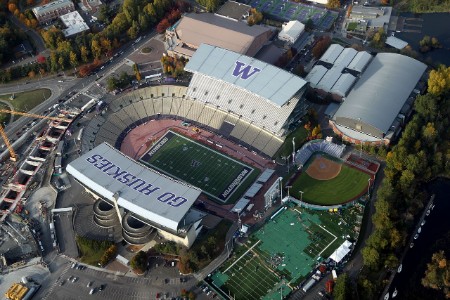 Hawaii is 2-0 beating two Pac 12 teams and they look to make it three straight on the mainland this Saturday facing a ranked Washington team. However, they are big betting underdogs and face a Huskies team that is coming off an upset loss in their last game.

Washington dropped in the rankings with their upset loss to California last week, which was a costly one not only because it was the Huskies first loss, but a conference one as well.

After two games Hawaii ranks 4th in the nation in passing yards per game averaging 428.5 yards in the air. However, the Rainbow Warriors do not have a great ground game and that suits Washington just fine, as they lost their last game to Cal with one of the main reasons them giving up 192 rushing yards.

These teams have not met since the 2014 season.

While the Rainbow Warriors do not have good betting trends in terms of their last several road and non-conference games, they are 12-4 ATS in their last 16 games facing teams from the Pac 12 even though they did not cover in their last game facing Oregon State.

Washington has failed to cover the spread in eight of their last 11 non-conference games.

Three in a Row?

The Rainbow Warriors look to go 3-0 and beat a Pac 12 team for the 3rd week in a row. They beat Oregon State 31-28 in their last game with another huge game for QB Cole McDonald, who passed for 421 yards with four TD and one INT.

McDonald has passed for 421 yards 378 yards in his first two games of the season, but he faced a Washington defense that only gave up 111 passing yards in their loss to Cal last week and 211 yards to a pass-happy Eastern Washington team in their season opener.

The Rainbows are all about the pass and in the win over Oregon State they only rushed for 67 yards averaging a paltry 2.7 yards per carry. Miles Reed is their leading rusher with only 82 yards after two games and his play will be key in this game. The Huskies’ defense will be focusing on the pass game and Reed and company have to pick up some yards on the ground.

Hawaii did rush for 159 yards in their season opening win over Arizona and if they can get a good run game going, they have a chance in this game facing Washington.

Huskies look to Bounce Back

Washington was shocked in their last game losing 20-19 at home to Cal where they were torched on the ground. On top of that QB Jacob Eason did not have a good game after lighting up Eastern Washington in his first game for UW passing for only 162 yards with no TD and a pick and also lost a fumble.

The Cal game had a break of over two hours because of weather and while Eason struggled, the Huskies still rushed for 182 yards. Salvon Ahmed rushed for 119 yards averaging a legit 5.7 yards per carry after only going for 44 yards on a 2.9 per carry averaging in the win over Eastern Washington.

The Hawaii run defense was torched in the win over Oregon State giving up 263 yards on the ground and they gave up 178 rushing yards in the opening win over Arizona.

The Rainbow Warriors gave up three sacks in the win over Oregon State and in this game face a much better Washington pass rush.

UW has failed to cover the spread in their last four games after a loss and are only 2-5 ATS in their last seven games facing a team with a winning record.

Washington will take out their frustrations on Hawaii after last week’s shocking loss and they will shut down McDonald. He will have some big plays, but the UW defense will pressure him all game long and force him into some bad decisions.

On offense the Huskies will run the ball at will and Eason will rebound. UW will lay a beat down on Hawaii in this non-conference game winning and covering the spread.