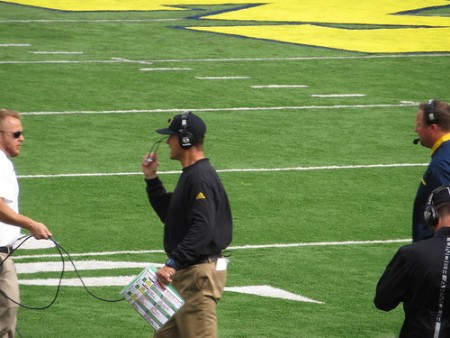 Michigan and Wisconsin have played just three times since 2011, but the home team has won nine of the last 10 meetings. It may be early in the season, but this game could have consequences for the Big Ten title, as well as the CFP.

The Badgers, who have dominated their first two games, opened as -3.5 point home favorites with an over/under of 43.5 at 5 dimes sportsbook.

After two sketchy wins for the Wolverines and a combined 110-0 score line for the Badgers, the sentiment is changing for both teams.

Michigan, like usual, was expected to challenge for the College Football Playoff this year, but after needing overtime to beat Army, the bandwagon is starting to jump off.

Will Wolverines be the 1st to Score on Wisky “D” ?

Of course, while Wisconsin has yet to allow a point, it’s not like it’s played top competition. USF and CMU are viable teams, but neither were expected to challenge Wisconsin.

The biggest help for Wisconsin has been the consistency of quarterback Jack Coan, who is completing 76.3% of his passes on 9.6 yards per attempt. Those numbers will likely take a hit in this game, but if he can play smart football, that’s usually enough in this offense.

That’s because Jonathan Taylor is still running over opponents as one of the best running backs in the country with 237 rushing yards and eight total touchdowns. Michigan’s defense is good, but it’s not at the same level as a year ago, having allowed 21 points in each of the first two games.

It doesn’t help that Wisconsin’s offense is better than the two previous teams Michigan has faced. While Taylor may not run wild against this front, if Coan can at least move the chains and limit turnovers, that could be enough for the win.

Michigan fans are hoping the bye week gave the offense some time to get things together. In the Heisman discussion before the season, Shea Patterson hasn’t looked much better than a year ago, averaging 7.1 yards per attempt with three touchdowns.

This offense has playmakers, but there’s been little to no explosion in the first two games. Freshman running back Zach Charbonnet has taken over in the backfield with 190 rushing yards and will get most of the touches in this game.

While Michigan’s offense has been suspect, Wisconsin still hasn’t allowed a point and it’s not like USF and CMU have the worst offenses in the country.

Things were a little different when these teams met in the middle of last season. Wisconsin had already lost at home to BYU and came in as a 10-point dog. Michigan won on both sides of the ball in a 38-10 win, running for 320 yards on 6.7 yards per carry, while picking off Alex Hornibrook twice.

Wisconsin ran the ball fine, but Hornibrook put them in a hole and they couldn’t run when Michigan took a bigger lead in the second half. If Wisconsin plays as good as it has looked, it will be able to ride Taylor all game and that’s a nice advantage to have.