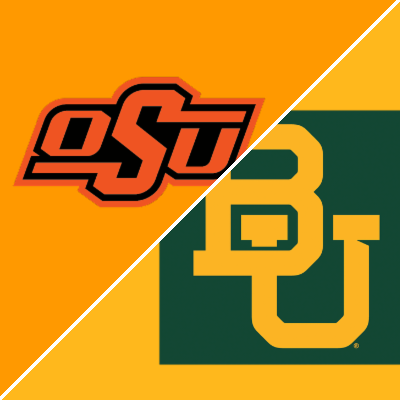 There’s still a chance for a Big 12 team to make the College Football Playoff and it’s not Oklahoma. In-state rival Oklahoma State enters the conference title game with one loss and faces two-loss Baylor. The Cowboys opened as -5 point favorites with an over/under of 46.5 points for the game at AT&T Stadium in Arlington.

These teams already met this season as OK State won 24-14 at home. It was low scoring because both teams leaned on the ground game with OK State having the bigger edge, mainly because it ran a ridiculous 26 more plays.

Both teams averaged 3.7 yards per carry and even though the Pokes had three turnovers to zero, they converted 8-of-19 third downs compared to 3-for-15 for Baylor. Remove those interceptions and this could’ve been a bigger win. Of course, remove some of those third-down conversions and Baylor would’ve had a better chance to win.

While that matchup was early October, nothing much has changed for these teams. Both are solid in almost every facet of the game and the winner will come down to things like turnovers and third-down conversions. Their defenses are near the top of the charts in a lot of categories with the Pokes allowing 16.4 points per game compared to 19.4 for the Bears. Both are allowing 3.6 yards per carry and that’s what the numbers looked like in that first meeting.

To make things easier for the favorite, quarterback Spencer Sanders can’t throw three interceptions again. He had two against Oklahoma and that almost cost them the game last weekend. His numbers are slightly down from prior seasons, tossing 16 touchdowns with eight interceptions.

It’s not much different for the Bears, as quarterback Gerry Bohanon is at 17 touchdowns and six picks on 8.4 yards per attempt. He’s questionable with a hamstring injury, but freshman Blake Shapen has been solid in relief. Still, the quarterback isn’t asked to do much when Baylor has a lead, but that’s not something that happened in the first meeting.

The offense relies on running backs Abram Smith and Trestan Ebnar, who are at 6.4 ypc and 5.4 ypc, respectively. Those two couldn’t get things going in the first matchup and that put Baylor in a 14-0 hole at halftime. Remove a 55-yard touchdown run in the third quarter and Baylor finished that game with 28 carries for 52 yards (sacks included).