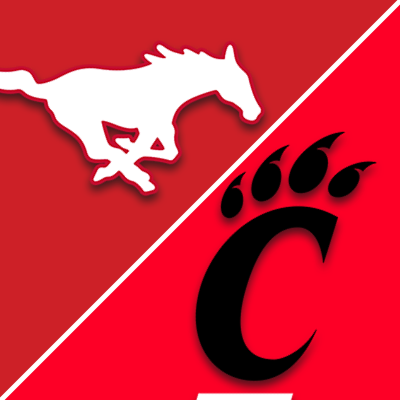 The dream isn’t over for Cincinnati just yet despite what early CFP rankings suggest. Win three more games and finish undefeated, and the College Football Playoff could be there for the taking. The Bearcats opened as -12 point home favorites with an over/under of 65 points for the game against SMU.

Cincinnati doesn’t have an easy game remaining on the schedule. SMU is the first test, followed by East Carolina and then possibly Houston in the AAC title game, which may be the top three teams in the conference outside of Cincy. Given some close wins and inability to truly separate from a team like USF, there are reasons to believe the Bearcats won’t finish undefeated.

While averaging 39.3 points for the season, the offense has failed to surpass 31 points in three of the last four games. To win these next three games, they’ll need to be at their best behind quarterback Desmond Ridder, who is averaging 8.4 yards per pass for 22 touchdowns and six interceptions.

The numbers are only slightly improved from prior seasons and the 22 touchdowns are a career high. Top running back Jerome Ford missed last week’s game, but they were fine without him, as Ryan Montgomery and Ethan Wright split backfield touches. Ridder has also taken it upon himself to run a bit more, carrying the ball at least 12 times (sacks included) each of the last three games after not hitting that number in the first seven contests.

SMU only has two losses, but it doesn’t have a good defense, allowing more than 400 yards per game, a lot of those through the air. Most notably, they gave up 44 points in a recent loss to Houston, something that could happen in this game if Ridder gets going.

Still, the Mustangs will have a chance to cover because they’re averaging 41.6 points per game and their two losses were by a combined 10 points. Their offense is just as potent as Cincy’s, mostly because of quarterback Tanner Mordecai, a transfer from Oklahoma.

He’s averaging 8.5 yards per pass for 37 touchdowns and 10 interceptions on 69.9% completion. He spreads the ball around a decent amount with four different receivers having at least 37 receptions and five of them having at least four touchdowns.

While they lean on Mordecai to score, they get plenty on the ground from Tre Siggers and Ulysses Bentley, the two of whom provide a contrast in running styles, as the former has 4.8 ypc and eight touchdowns compared to 7.1 ypc and three touchdowns for the latter.

Cincinnati’s defense is good, allowing 16.2 points and 315 yards per game, but it isn’t dominant and it’s been mediocre against the run. They gave up a season-high 28 points last game, but some of that can be attributed to offensive turnovers and an 80-yard touchdown.

That said, SMU may have the best offense that Cincy has faced this season and that has to mean something. The Bearcats may be headed for 40-plus points, but the Mustangs should be able to hit at least 30 if all goes well.