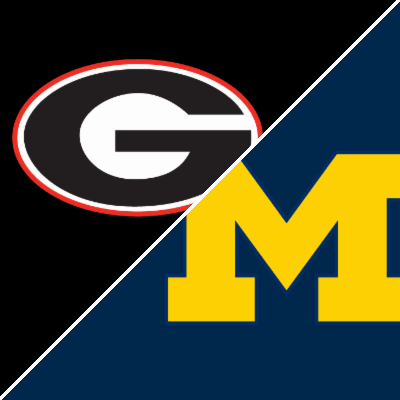 Georgia is coming off a big loss yet is still favored against the Big Ten champ, Michigan, which was 100-1 to win it all at the beginning of the season. The Bulldogs were steady -7.5 point favorites with an over/under of 45 points for the Orange Bowl being played at Hard Rock Stadium in Miami.

Georgia was the No. 1 team in the country the majority of the season but the 41-24 loss to Alabama in the SEC title game ended that streak. Despite that loss, the Bulldogs still have the best defense in the country, allowing 9.5 points and 254 total yards per game. Some of that is because of an easier SEC schedule, but those are still awesome numbers no matter who you play in the SEC.

It wasn’t as clear cut for Michigan, which also had a fairly easy schedule until the end of the season. The Wolverines may have the best defense in the Big Ten, allowing 16.1 points and 316 yards per game. There weren’t a ton of elite Big Ten offenses, but those numbers still stand above the rest. On the downside, they were gashed on the ground in the loss to Michigan State and they were somewhat aided by the weather in the win against Ohio State.

The main matchup in this game is Georgia’s rush defense, which is allowing 2.6 yards per carry, versus Michigan’s rushing attack that is averaging 5.3 yards per carry. The Wolverines ran through Ohio State and Iowa in their final two games and that’s the reason they have a chance in this contest. Sure, Georgia has better numbers against the run and has an elite defensive front, but Michigan’s recent performances are tough to beat.

Then again, if the Wolverines are limited to around 4.0 yards per carry or worse, it’ll be on Cade McNamara to do the rest, which isn’t a given. The quarterback has been fine this season, totaling 15 touchdowns and four picks in a minimal role. Michigan has run the ball almost 200 more times than it’s thrown it, which says everything. In the backfield, Hassan Haskins has more yards and touchdowns, but Blake Corum is averaging 6.7 yards per carry compared to 4.9 for Haskins. Corum has barely touched the ball the last few games, but it wouldn’t be surprising if he had a bigger role in this one.

On the other side, Georgia is arguably a worse offensive team. All signs point to Stetson Bennett starting at quarterback, but there’s always a chance JT Daniels gets the job back after a few weeks of practice.

No matter the case, the Bulldogs always seem to have a quarterback problem in the biggest games. Bennett is averaging more than 10 yards per pass, but he threw two costly interceptions in the loss to Alabama. Georgia’s ground game has good numbers, averaging 5.3 yards per carry, yet the explosiveness has often been missing. No matter, Zamir White and James Cook will get their touches.

The spread is just over a touchdown and there’s always the chance Georgia’s defense dominates this matchup, but a lot of the numbers point to this one being close. As long as Michigan can find some room to run, that should be enough to stay competitive, mainly because Georgia’s offense isn’t a massive threat.

The Bulldogs are 6-2 ATS in their last eight bowl games, while the Wolverines have failed to cover in their last four bowls. The under is 6-1 in Georgia’s last seven bowl games as a favorite but the over is 8-1 in Michigan’s last nine against the SEC.