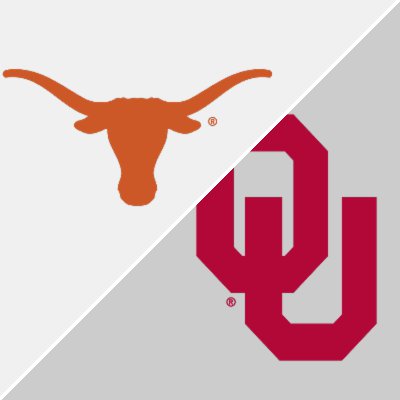 It could be a down year for both Oklahoma and Texas but both are still in the running for the Big 12 title game. The Sooners have yet to lose and maybe partly due to recent history, they opened as -3.5 point favorites (now -3) with an over/under of 63.5 for the Red River Rivalry at Cotton Bowl Stadium in Dallas.

Oklahoma has won the last three meetings between these teams, most recently a 53-45 result, but that was before Steve Sarkisian. Even then, seven of the last eight meetings have been decided by single digits and that looks to be the case again.

The Sooners are undefeated, but they aren’t dominant. Four of their five wins have been by seven points or less, including last week’s 37-31 win at K State and then 16-13 over WVU before that. They haven’t been able to gel on both sides of the ball and that’s led to some close games.

Up and Down for Longhorns

It’s been a bit different for the Longhorns, as almost all of their games have been blowout or bust. They lost by 19 points at Arkansas, beat Texas Tech 70-35, and then last weekend, squeezed out a 32-27 win at TCU.

According to the numbers, this will be Oklahoma’s most-difficult game up to now and that’s a reason a lot of people could look at the underdog. Neither team stands out in any facet outside of maybe the Texas ground game, so that’s probably the best place to start.

The Longhorns aren’t getting a ton from their quarterbacks, but that’s fine because Bijan Robinson is averaging 6.2 yards per carry for 652 yards and seven touchdowns. He hit 216 yards last game and backup Roschon Johnson is plenty capable with the ball in his hands.

For the most part, that’s all they’ve needed, at least in their wins. Quarterback Casey Thompson completed just 12-of-22 passes last game and outside of his five TDs against Texas Tech, hasn’t really done much. In the lone game in which Texas struggled to run the ball, it scored just 18 points against Arkansas, though Hudson Card also started that game at quarterback.

The big thing for Oklahoma is that it’s been one of the best in the country at stopping the run, allowing 2.7 yards per carry and just 83.6 rushing yards per contest. The schedule hasn’t been overly easy, so those numbers are definitely respectable. If Oklahoma stops the Texas ground game, it’ll be up to Thompson to put points on the board.

Of course, the other reason the Sooners aren’t blowing teams away is that their offense has struggled to get going. Behind a weaker than usual offensive line, Spencer Rattler hasn’t been a patented Oklahoma quarterback, posting just 10 touchdowns and four picks on 7.9 yards per attempt.

In comparison, he had 28 touchdowns on 9.6 yards per pass last season. For now, that’s been good enough, as running backs Kennedy Brooks and Eric Gray are both averaging at least five yards per carry. Still, the lack of explosiveness from this offense is evident, and a reason Texas should stay competitive in this game.

Defensively, the Longhorns are a little harder to trust. They’re allowing 4.7 yards per rush and almost 400 yards per game. There’s a world in which Rattler has another mediocre game and Oklahoma still wins by 10 points.

This game probably won’t be as high scoring as last year, but that doesn’t mean it’ll be worse. Funny enough, it may be the Oklahoma defense that wins this matchup, something that hasn’t often been the case under Lincoln Riley.

The Longhorns are 7-2 ATS in the last nine meetings, having been an underdog in each of those, and the under has hit in the last four.