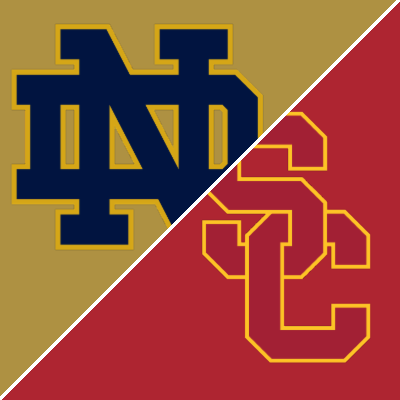 USC has booked a ticket to the Pac 12 title game and look to stay alive for a CFP bid hosting Notre Dame. The Trojans are a 5.5-point home favorite in this game with the total sitting at 64.5.

The betting public has slightly backed Notre Dame in this game, as they opened as a 6-point underdog and as of Thursday are a 5.5-point dog.

These teams have faced off every season for a long time now and Notre Dame has won the last four meetings and last season beat them 31-16.

Notre Dame lost their first two games of the season but are 8-1 since and have reeled off five straight wins. They are coming off a shutout win, 44-0 over Boston College, and they have beaten three ranked teams including handing Clemson their only loss of the season.

Two players that have to play well in this game is the RB duo of Audric Estime (782 yards 11 TD) and Logan Diggs (698 yards 2 TD). They combined for nearly 200 rushing yards in the last game with Diggs rushing for 122 yards averaging 8.1 yards per carry.

Notre Dame should be able to move the ball and score points facing a USC defense that has given up an average of 47.ppg over the last four games. The Trojans rank 60th in the nation on run defense and only 102nd on pass defense.

While the USC defense has struggled mightily as of late, they are the third highest scoring team in the nation (42.9 ppg) and they have totaled 103 points in the last two games. In their last game they knocked off a ranked UCLA team 48-45 where they racked up 649 yards. Still, they only won by three points forcing four turnovers, only committing one, and they gave up 513 yards.

The potent Trojans’ offense is led by Heisman candidate Caleb Williams (3,480 yards 33 TD 3 INT), who ranks third in the nation in QBR and in the win over UCLA passed for 470 yards with two TD and an INT and also rushed for 33 yards.

Austin Jones (455 yards 5 TD) rushed for 120 yards in the last game and is the lead back with Travis Dye (884 yards 9 TD) out for the season with an injury. QB Williams ranks third on the Trojans with 316 rushing yards.

The high-powered USC offense will be facing a balanced Notre Dame defense that ranks 15th in the nation against the pass and 32nd against the run.

The model is all over Notre Dame in this one regardless of the time frame parameters used. Unfortunately as of this writing all of the +6’s are gone. Remember, sports betting is a numbers game!