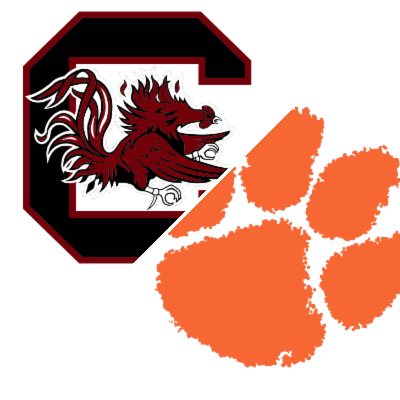 Bragging rights in South Carolina is up for grabs when 8th ranked Clemson looks to keep their slim CFP hopes alive playing host to South Carolina. The Tigers are a big 14.5-point betting favorite in this non-conference rivalry with the total sitting at 51.5.

The betting public has slightly backed Clemson, as they opened as a 14-point favorite and as of Thanksgiving Thursday they are a 14.5-point favorite.

These teams meet annually and Clemson has won the last six meetings and in the last two have outscored the Gamecocks 68-3.

In their last game South Carolina was a 23.5-point home underdog facing, then, fifth ranked Tennessee but they blew up and steamrolled the Volunteers beating them 63-38. The Gamecocks lost their first two games facing ranked teams but have won their last two facing top 25 squads.

The 63 points scored in the last game was the third time this season the Gamecocks have scored at least 50 points.

Lead RB MarShawn Lloyd (556 yards 9 TD) has missed the last three games with a quad injury and is listed as questionable. The team’s second leading rusher is TE Jaheim Bell (232 yards 2 TD) and he rushed for 80 yards against Tennessee.

The Gamecocks will be facing a Clemson defense that ranks 38th in the nation against the pass and eighth against the run.

Tigers Need a Lot of Help

Clemson needs to win their last two games, including the ACC title game facing North Carolina, and get help to sneak into the CFP. I mean they are eighth in the CFP rankings and are even behind two teams that have two losses in LSU and Alabama.

The Tigers have won two in a row since their lone loss against Notre Dame and in the two wins they have outscored their opponents 71-26. In their last game they were at home and crushed Miami 40-10.

DJ Uiagalelei has passed for 2,412 yards with 21 TD and only 6 INT but four of the picks have come in the last four games. He is also the team’s second leading rusher (494 yards 6 TD) and in the blowout win over Miami he rushed for 89 yards and a TD and passed for 233 yards with two TD and a pick.

Antonio Williams (512 yards 3 TD) leads four Tigers that have at least 308 receiving yards. Will Shipley leads the team with 960 rushing yards and 13 TD. After two big games with at least 121 yards, he has failed to rush for over 100 yards in the last three games and in the last one rushed for 61 yards and a TD but only averaged 3.6 yards per carry.

In terms of South Carolina’s defense, they rank 54th in the nation against the pass and only 109th against the run. While they crushed Tennessee last week the Gamecocks still gave up over 500 yards of total offense.

Clemson is 4-1 ATS in their last 5 games facing South Carolina.

Here are 3 score predictions from our model using 3 different time frame parameters. All favor South Carolina plus the points.