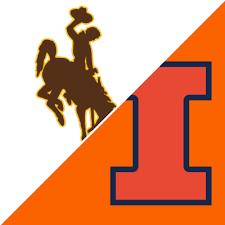 Illinois will host Wyoming on August 27th with kickoff scheduled for 4 pm EST. This is one of the more interesting games taking place on this first day of college football 2022 and we’re looking forward to it. The Illini are -10 point favorites up from an opener of -9 and the total is 46.5 at betonline.

Get all of the plays from the top handicapping services in the country with our Football Consensus Report. As a special bonus you’ll also receive the score predictions from our model for every game through the Bowls and Super Bowl. Click Here to Win!

The Fighting Illini are in off of an overachieving 5-7 year. They missed becoming Bowl eligible by one game but this team was competitive just about every time they took the field in 2021. Those 5 wins include knocking off both Minnesota and Penn State.

They bring in QB Tommy DeVito from Syracuse this year in hopes of giving the passing game a boost, along with new offensive coordinator Barry Lunney Jr.

Defensively the Illini were solid and hope to remain so. They held 8 opponents to 22 points or less, often times much less. With 6 returning starters to that unit the Illinois defense is expected to once again keep this team in games.

Wyoming May Drop A Notch

Wyoming was 7-6 in 2021 capped off with a 52-38 win in the Idaho Potato Bowl over Kent State. The Cowboys excelled at running the ball last year with 5.2 yards per rush attempt, good for 16th in the country.

Unfortunately Wyoming had one of the worst passing games in the country. It may or may not improve this year as there is still some uncertainty at QB. Early on it looks like Andrew Peasley, a transfer from Utah State.

Overall Wyoming returns just 3 starters on offense and 2 on defense. They had to rely on the transfer portal to fill holes this year and when that’s the case you just don’t know how it’s going to turn out. It’s hard to gauge but probably safe to say the Cowboys won’t be as good as last season and a Bowl game may be in doubt.

Bret Bielema is in year #2 of his rebuilding project at Illinois. He never had a losing year at Wisconsin and took Arkansas from 3-9 in his first year to 7-6 in year #2. All of the pieces are in place to build on off of a promising 5 win 2021 which quite frankly was only a play here or there from being a 7+ win season.

In looking for teams on the verge of getting over the hump the most promising sign is close losses. That’s because more times than not when a team is climbing the hill, they turn those close losses into wins the following year. That’s right where the Illini stand going into 2022.

They were helped in 2021 by having several players with an extra year of eligibility due to COVID, but so too were so many other college football teams last season.

Our model predicts a final score of Illinois 23 Wyoming 14. An 8 point win for the Illini. Now that’s using data from last season. Illinois figures to be in better shape than Wyoming in game #1 so you can tack on another 2 or 3 points which puts us right at the current betting line.

We think Illinois wins this game and likely covers the 10 point spot, but perhaps the better play here is the total. Our number is a full 9.5 points less than the posted total. The Illinois defense figures to once again be solid and we know Wyoming is going to try and do what they do best which is run the ball.