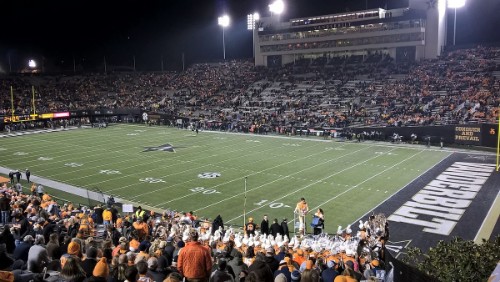 The hype is growing by the day for LSU and it’s unlikely to slow down after a trip to Nashville. The Tigers are rolling and were early -23.5 point road favorites with an over/under of 62.5 against Vanderbilt.

Joe Burrow is still one of the Heisman favorites and it’s hard to see Vandy containing him. Given his inconsistencies last year, Burrow’s numbers are eye-popping, completing 83.3% of his passes for 12.5 yards per attempt and 11 touchdowns.

Sure, those numbers are somewhat juiced due to schedule, but he had no problems against a better Texas defense en route to a 45-38 win. And he shouldn’t have any trouble against Vandy, who gave up 509 passing yards to Purdue last game.

Georgia Had 8 Yards Per Carry on Vandy

That said, it remains to be seen how effective LSU can be running the ball as top running back Clyde Edwards-Helaire is at just 182 yards on 4.9 yards per carry. This isn’t the same offense as year’s past, but it’d help if the running game could survive on its own.

Despite Purdue not running against this front, there should be holes because that’s the only thing Georgia did against Vandy with 323 rushing yards on 8.1 ypc. Either way, the Tigers will be able to move the ball.

The Commodores are at home, but it won’t be easy to take them for the cover even though they lost to Georgia by 24 points. If Burrow keeps rolling, LSU has the chance to hit 40 points again and then you’d have to bet on the Vandy offense.

The Commodores managed just six points against Georgia and 24 against a bad Purdue defense. Quarterback Riley Neal doesn’t have a terrible 7.7 yards per attempt, but that’s aided by a 75 yarder and 49 yarder.

Without those two long passes, his numbers would look much worse. This offense has viable players like receivers Kalija Lipscomb and Jared Pinkney, but they simply haven’t produced.

The same goes for running back Ke’Shawn Vaughn, who has 130 yards on 4.1 yards per carry. While struggles against Georgia are understandable, they should’ve been able to run more against Purdue.

LSU is better on both sides of the ball and now have an offense that can pour points on the board. While some will look to the Georgia result (30-6) as a reason not to take LSU, but the Bulldogs still dominated that game.

If Burrow wants a chance at the Heisman, he has to continue to put up huge numbers and that means a 40-point effort against Vanderbilt.

The over is 3-0-1 in LSU’s last four games following a straight-up win, but the under has hit in Vandy’s last four SEC games. These teams haven’t played since 2010, but the road team and under have hit in the last four meetings.