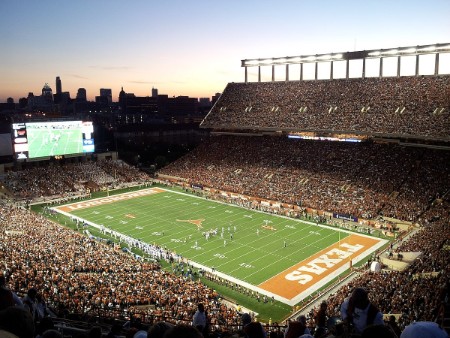 Texas opened as -7.5 point favorites over Oklahoma State this week but early money on the Cowboys has driven the line down to -5 at betonline sportsbook. The current posted total is 73.

The Big 12 gets started this weekend with everyone hoping to knock off Oklahoma. Not many believe Oklahoma State will contend for the title, but Texas is in conversations, though already has a loss to LSU.

The spread may seem small, but the last nine spreads between these teams has been seven points or less. No matter how good either team is, the oddsmakers never think one of them is 10 points better than the other. (3 of last 4 decided by 3).

OK State is undefeated, yet hasn’t played a good team and its defense hasn’t shown much, already allowing 36 points to Oregon State.

It’s been a similar case for Texas, who lost to LSU because its defense wasn’t good enough. That’s how last year’s game played out with the Cowboys winning 38-35 at home behind a balanced attack.

This year, the Longhorns get the advantage at quarterback with Sam Ehlinger, who is completing 73.2% of his passes for 11 touchdowns and no interceptions. Devin Duvernay has been his favorite receiver with 27 receptions while Collin Johnson has dealt with a nagging hamstring injury (should be good to go for this game).

The ground game has also been solid with Ehlinger going for 121 yards and Keaontay Ingram at 181 yards on 5.3 yards per carry. This is a complete offense with an experienced quarterback and it wouldn’t be surprising if Ehlinger really opened things up. He completed just 22-of-42 passes in last year’s game, but this year should be different.

Freshman quarterback Spencer Sanders is completing 67.2% of his passes and has run for 219 more yards, but he hasn’t exactly played a high-level defense. Texas may not have an elite defense, but playing on the road in the Big 12 opener will be tough for Sanders.

How Good is Texas Run Defense?

That’s why the Cowboys will probably lean on running back Chuba Hubbard, who already has 521 yards and seven touchdowns on 7.9 yards per carry. The question is how good the Texas run defense is because that could decide the game.

While the Longhorns are allowing 330 passing yards per game, they’re allowing just 87.3 on the ground. If Hubbard can’t find the same room he’s been getting, this could turn into a Texas rout.

The Cowboys have covered their last four overall and their last six on field turf. The Longhorns are 1-5 ATS following a straight-up win and the under is 21-5 in their last 26 following an ATS win.