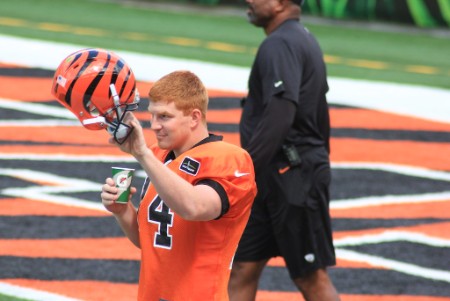 The Buffalo Bills are 2-0? Who would have thought? They are tied with the New England Patriots atop the AFC East and in this Sunday afternoon game are 6-point home betting favorites against the Bengals with a total of 43.5.

The Bengals put up a fight in their first game in a one-point loss to the Seattle Seahawks, but the same cannot be said for their last game where they lost at home to the San Francisco 49ers 41-17.

These teams met last in the 2017 season at Cincinnati where the Bengals beat the Bills 20-16.

The Bills have covered the spread in nine of their last 14 games facing the Bengals.

Not the Best Home Showing

In their 41-17 loss at home to the 49ers in their last game the Bengals were never in the game and they were outgained 572 yards to 316 yards. The run game was all San Fran, as they rushed for 259 yards while Cincy only rushed for a grand total of 25 yards.

Andy Dalton had another big game in the air passing for 311 yards with a couple of scores and a pick and Tyler Boyd and John Ross III each had over 100 receiving yards. The team is still without star WR A.J. Green and while he should come back soon, he is out for this game.

The big question is can Dalton get any help in this game? The run game has been terrible for the Bengals through their first two games where they rank dead last in the league averaging 29.5 rushing yards per game. Joe Mixon has a grand total of 27 yards on the ground this season averaging 1.6 yards per carry and this is after rushing for 1,168 yards last season.

The Bills are 2-0 winning their first two games on the road facing the New York teams of the Jets and the Giants. In their last game they beat the Giants 28-14 where they only had 18 more overall yards but ran the ball better and forced two turnovers and did not commit any.

Josh Allen had a solid game in the win over the Giants passing for 253 yards with a TD and no INT and Cole Beasly and John Brown combined for 155 receiving yards. Frank Gore led the team with 68 rushing yards and Devin Singletary chimed in for 57 rushing yards.

The Bills have not faced good passing team early this season and their secondary will be tested in this game. However, if they can keep the Bengals struggling on the ground and force Dalton into shouldering the offensive load Buffalo will be in good shape.

The Bengals have covered the spread in seven of their last 10 games after a double-digit loss at home in their previous game.

Dalton will have a good game, but like the other two games he will get little help. Buffalo is playing with confidence and they are at home and they will win this game and cover the spread.