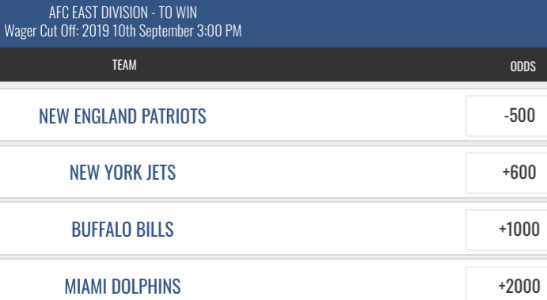 The current AFC betting odds to win the division favor the New England Patriots to once again be the top dog. They are the prohibitive favorite at -400.

The AFC East has long been looked at as one of the weaker divisions in the NFL. Last season saw the New England Patriots win the division (and Super Bowl) which leads to them being installed as the betting favorites to repeat.

The other teams in the division are the Bills, Jets and Dolphins. Hardly juggernauts. Can any of them knock the Patriots from the top of the AFC East standings in 2019?

Doubtful. But read on…..

The Patriots have won the AFC East in 10 straight seasons and BetOnline has them as the major betting favorites to win the division this season.

The New England Patriots (-400) are the defending Super Bowl champions and led by the ageless Tom Brady and living legend Bill Belichick. star TE Rob Gronkowski and key defensive players of Trey Flowers and Trent Brown are gone, but the team is still loaded.

As usual Belichick had a masterful draft making moves to secure six picks in the first three rounds. So, the defense only ranked 21st in the league last season, but in the Super Bowl held the Rams to only three points.

Last season the Jets (6/1) won four games and finished last in the AFC East but have the 2nd best betting odds this season to win the division. The reason is for their possible potential, as QB Sam Darnold had a solid rookie season and the team went huge in the off-season signing stars RB Le’Veon Bell and LB C.J. Mosley and WR Jamison Crowder.

Mosley and a few other solid additions will help, but the team still only ranked 25th in the league last season on defense. On top of that New York has a killer early-season schedule, as after hosting the Bills in the season opener they face the Browns, Patriots two times, Eagles, and Cowboys.

Many New Faces in Buffalo

The Bills (7/1 odds) added many new faces in the off-season, but the only star of the bunch is still an unknown in rookie DE Ed Oliver, who may have been a steal with the 9th pick in the draft.

QB Josh Allen came on strong after a shaky start in his rookie season and the team added WR’s John Brown and Cole Beasley and RB’s Frank Gore and T.J Yeldon to play along LeSean McCoy.

Buffalo had the 2nd best defense in the league last season, but also only ranked 30th on offense. Allen has to make major strides in his sophomore season and the new guys have to play big for the Bills to have any chance to win the AFC East.

Before the 2019 season begins it looks as if the Dolphins (20/1 odds) are already looking to tank for the 2020 NFL draft to get a franchise QB. In the off-season they jettisoned Ryan Tannehill, Frank Gore, Danny Amendola, Cam Wake, Ndamukong Suh, and Robert Quinn.

This for a Miami team that finished 2nd in the AFC East last season at 7-9 even though they only ranked 29th in the league on defense and 2nd to last in offense.

The Fish did trade for QB Josh Rosen, who was a top 10 pick in the 2018 draft, and he will battle it out with journeyman Ryan Fitzpatrick for the starting job. Still, the cupboard is bare in Miami and they may reach their goal of being the first team to the podium in the 2020 draft.

Use Yards Per Play to make your own NFL Line