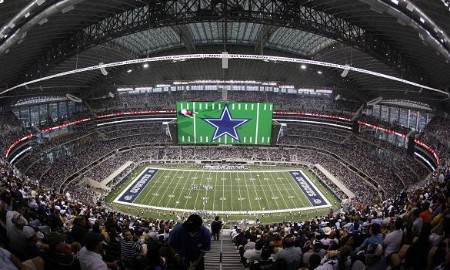 Prospective playoff teams will do battle at 4:25 p.m. ET on Thanksgiving Day at AT&T Stadium in Arlington, TX. The spread opened with the Cowboys as -7 favorites, but has dropped to -6-½ at most sportsbooks. The total opened at 45, but was pushed up to 47. Both teams have covered three of their last four games against the spread.

A win for the Cowboys would keep them one game ahead of divisional rival Philadelphia.

A loss for the Cowboys would leave fans thinking that Rome is burning.

A win for the Bills would give them a desperately coveted win over a “top” team.

A loss will continue talks that despite being 8-3, they’re just pretenders.

There have been few 8-3 teams in NFL history disrespected as much as the Bills. In the early part of the year, the talk was that they haven’t beaten a good football team. Unfortunately, those doubts still linger as their top win was against a 6-5 Titans team. They played 10-1 New England to a 16-10 finish which although a loss is worth mentioning.

If Buffalo wants to get the nation on board, then they need to beat America’s Team on Thanksgiving with the entire world watching.

This team is playing good football and might be flying under the radar.

Last week’s game against the Patriots was the talk of the football world, but the Cowboys were unable to get going on offense and ultimately lost 13-9. The defense played great and the pass rush was especially strong. They face a different type of QB in Josh Allen this week, but should be up for the task. Allen is mobile and can use his legs to get out of trouble. So, when the pressure is on he might slip out of the backfield and take off for a first down.

RB Ezekiel Elliott continues to look like a superstar. The old saying goes, you can hope to contain him, but you aren’t going to stop him. The 14th ranked rushing defense of the Bills is the type that he can break loose for 150+ yards on. Elliott should be the focus of the offense today because QB Dak Prescott is facing the third best passing defense in the NFL one game after top WR Amari Cooper was held without a catch.

When Dallas plays their best football they are capable of beating any team in the NFL.

The AFC’s leading WR, Josh Brown, will play a key role in the outcome of this game. The 91st overall pick in the 2014 draft has 58 catches for 856 yards and 5 TDs this year. He has at least 50 yards in every game this week and has been particularly impressive in the last two games he’s played, racking up 11 catches for 176 yards and 3 TDs.

Look for the Bills to get the run game going and take some shots to the end zone with Brown.