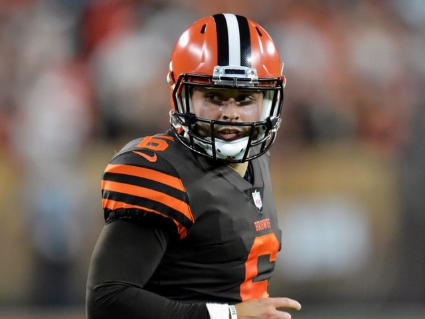 It was recently announced the Jets starting QB Sam Darnold has mono and is out for this game. The Browns opened as a 3-point favorite and now are a 6.5-point favorite with the total sitting at 44.

Both teams lost their season openers with the Browns losing to the Tennessee Titans 43-13 after Baker Mayfield threw three 4th quarter interceptions. The Jets lost to the Buffalo Bills 17-16 where they were up 16-0 and they were outscored in the 4th quarter 14-0.

These teams met last season in Cleveland where the Browns beat the Jets 21-17.

Close until the Turnover Bug Hit

The Browns were in their game with the Titans only down two points nearing the end of the 3rd quarter. However, they then gave up a TD on a 75-yard passing play and Mayfield was then picked off three times in the 4th quarter where one was returned for a TD.

Mayfield had 285 passing yards in the game and the two big-name WR’s in Odell Beckham Jr. and Jarvis Landry combined for 138 receiving yards. The Cleveland offensive line has to protect Mayfield better in this game, as in the Tennessee one he was pressured all game and sacked five times.

The Browns rushed for over 100 yards with Nick Cubb the lead rusher with 75 rushing yards.

Mayfield and company will be facing a Jets’ defense that gave up 370 yards in their loss to Buffalo last week (242 passing yards 128 rushing yards).

Can the Backup Get it Done?

With Darnold out Trevor Siemian will get the start in this game and he has not started a game since the 2017 season with the Denver Broncos. In his career he has passed for nearly 2,300 yards but has more INT (14) than TD (12).

Le’Veon Bell made his debut for the Jets in the last game and rushed for 60 yards only averaging 3.5 yards per carry and also had 32 receiving yards. I look for New York to lean more on the run game with their backup QB getting the nod and he will face a Cleveland defense that gave up 126 rushing yards to Tennessee last week.

Siemian has experience under center but has to avoid mistakes and give the rock to Bell often.

Both teams would, obviously, like to avoid an 0-2 start and this is especially the case for the Browns, as in their next two games and in four of their next five they face playoff teams from last season including the two teams that met in the Super Bowl in the L.A. Rams and New England Patriots.

The Jets are playing their backup QB and the Browns are coming off a bad win when they have high expectations this season. I think Mayfield and the Browns will come out big in this game and the Jets’ offense will struggle and they did just that last week even with Darnold on the field.

The Browns will win this game and cover the 6.5-point spread evening their record at 1-1 while sending the Jets to an 0-2 start.